Olive Garden never fails to deliver with its delicious pasta, but they’ve just given us two reasons to venture to other parts of the menu. The new Gorgonzola Topped Sirloin And New Parmesan Alfredo Crusted Sirloin are now available for a limited time at particiapting locations. 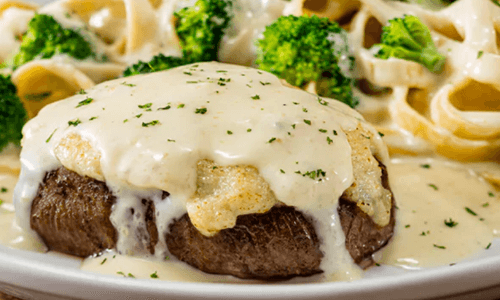 The Gorgonzola Topped Sirloin includes a six-ounce sirloin with gorgonzola cheese, sun-dried tomatoes, and balsamic, while the Parmesan Alfredo Crusted Sirloin is topped with a parmesean alfredo crust, hence the name. Both new entrees come with a side of fettuccinne alfredo with broccoli. To round out your choice of entree, customers can choose a house salad or a soup (options include Each meal comes with two breadsticks, as well.

While prices may vary slightly by location, the Gorgonzola Topped Sirloin is sold for $18.49, and the Parmesan Alfredo Crusted Sirloin is $18.99.

Here’s a peak of the nutritional information for both new menu items.

Not in the mood for steak? Olive Garden has other new additions to the menu, including the Stuffed Ziti Fritta, Calamari, and Zoodles Primavera (with grilled chicken or sauteed shrimp).