McDonald’s has officially released the McChicken Biscuit and Chicken McGriddle countrywide. Back in July 2019, the restaurant only released the breakfast sandwiches at select locations across the United States, but McDonald’s has now confirmed that these two will be available nationwide for a limited time. Customers have the opportunity to purchase either one during breakfast hours. 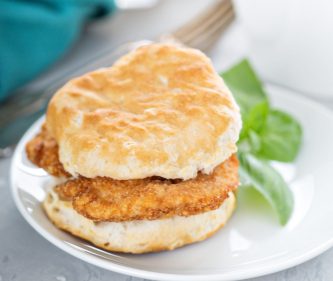 McDonald’s McChicken Biscuit includes a crunchy chicken fillet on a warm soft buttermilk biscuit that is brushed with real butter. Below is a list of the nutritional information for the McChicken Biscuit.

Customers can download the McDonald’s app on their mobile devices to order breakfast online and skip the lines with the restaurant’s Mobile Order & Pay feature. If you happen to be at a McDonald’s drive-thru and are in search of a healthier option, you can check out these 8 McDonald’s healthy choices.