You are here: Fast Food Prices > History of Burger King

At a glance, the history of Burger King is a tale of loss, struggle, and triumph – and ultimately, a fight to win the age-old rivalry with McDonald’s. The beloved burger joint has always gotten the short end of the stick, it seems – from bouncing from one owner to the next and gaining profit share just to lose it again. While the fast food giant remains one of the most profitable restaurants today, the road to success took a lot more than flipping Whoppers and handing out paper crowns.

The Start of the History of Burger King

What served as the muse for Burger King’s founding? Unsurprisingly – Keith Kramer and Matthew Burns marveled at the up-and-coming McDonald’s franchise when they decided to venture out and try the concept in their own restaurant. After obtaining the rights to a fancy burger broiler – the Insta-Broiler – the two men started what was originally called “Insta-Burger King” in Jacksonville, Florida, with the same drive-up, quick service concept as its golden arch nemesis.

Originally selling for 37 cents, the Whopper was born out of the desire to offer customers a bigger burger than competitors. Advertising “the burgers are bigger at Burger King” and “The King Sized Burger you only get at Burger King,” the fast food brand made it clear they were okay with publicly shooting down the competition. And while The Whopper would provide them profits throughout history, Insta-Burger King’s sales were dropping quickly.

The History of Burger King: Expanding the Franchise 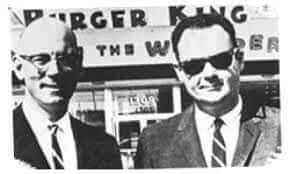 Changes were well underway for Insta-Burger King. Back in 1954, Franchisee partners James McLamore and David Edgerton had purchased one of the fast-food joints in Miami, Florida, which is where the headquarters are located today. They went on to replace the Insta-broiler with a gas grill, buy out the owners, and simplify the restaurant’s name to Burger King. While the duo had success in expanding the franchise to 250 locations across the US, they sold the company years later.

On to its next owner, Pillsbury worked to change nearly every function at Burger King – from the way it was franchised to the menu and the aesthetic of the restaurants and marketing collateral. They even brought a former McDonald’s executive, Donald Smith, on board to help turn the sinking ship around.

Under Smith’s management, he concepted Burger King’s rendition of Ronald McDonald, Sir Shake A lot and the Wizard of Fries. He also introduced the fish sandwich and the chicken sandwich to the menu. Though it appeared Burger King was having an identity crisis, sales began to rise with Smith’s changes.

But, like a broken record, Smith left the franchise in 1980, and sales began to fall again.

More Mergers and Acquisitions in the History of Burger King

Undergoing more changes in management, Burger King started to see improvements when Pillsbury’s Norman Brinker stepped in, prompting a new way of advertising. According to The Balance, “He started what became known as the Burger Wars, running commercials that said Burger King’s burgers were bigger and better than McDonald’s; these may be the first political-style ‘attack ads’ in the food industry.”

However, the stabilization of Burger King’s profits didn’t last long. Brinker stepped down and Pillsbury was bought out by Grand Metropolitan PLC, which then merged with Guinness.

Around the end of Grand Met’s ownership, The Balance explains, “(Burger King) declined again until TPG Capital, with assistance from Goldman Sachs and Bain Capital, bought Burger King for $1.5 billion. An IPO was launched in 2006, generating $425 million in equity proceeds.”

Does this mean things started to turn around for good?

A Happy Ending for the History of Burger King?

For a short time, the company didn’t know what direction to go in. With so much mixed advertising, people didn’t know what
Burger King was about anymore. One minute they pushed for a giant burger. The next, they added a fish sandwich that looked promising to the pescatarians. Even though they’ve faced problems like these for years, Burger King has managed to stay afloat. 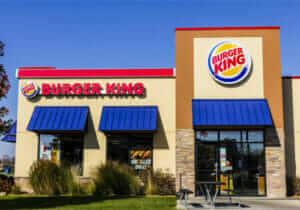 Nearly half a century later, Burger King has gone through a whirlwind of changes. Amazingly, at the end of 2012, Burger King had acquired 12,700 food chain stores across 73 countries. About 66 percent are within the US, and most are privately owned. With a concept that copycatted McDonald’s, to the second largest fast food chain on the planet, Burger King now has 15,000 locations. After years of trial and error, we can only hope the franchise will hold its own against the golden arches.

And while you can’t pick up a Whopper for 37 cents anymore, Burger King prices are still quite competitive. Let us know what your favorite Burger King treat is in the comments below!