“The original and still the best” is Golden Chick’s slogan. Its president, Mark Parmerlee believes that the spirit of this slogan is still true today, as when he first bought the company in 1989.

After more than 40 years in the restaurant business specializing in chicken menus, Golden Chick has gained a reputation of providing high quality chicken meals offered in tandem with high quality customer service.

Patrons of Golden Chick are growing in numbers because of its affordable menu, a classic recipe for fried chicken and a family-style eating experience.

A Look Back at Golden Chick’s History

The first restaurant of Golden Chick opened in San Marcos, Texas in 1967. But its original name was not Golden Chick, but Golden Fried Chicken. The original concept was developed by a former employee of a chicken franchisee. He believed that there is a better way to run a franchise system. 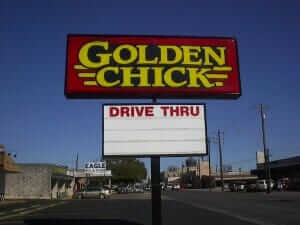 A secret marination and batter mixes created the delicious chicken and this resulted in a lot of franchise inquiries. When the original founder sold the restaurant chain in 1982, there were already a total of 39 Golden Fried Chicken stores.

In March 1989, the company was bought by an investment firm. The involvement of this investment group was strongly supported by the Golden Fried Chicken franchise community. From that time on, the brand name experienced a steady growth. New restaurants opened throughout the region and the total number of stores grew to 120.

New innovations were introduced to the menu to enhance its customer appeal. The look of the restaurant also underwent upgrading aimed to boost the restaurant’s future growth.

In 1996, after about 40 years from its inception at San Marcos, Texas, the name Golden Fried Chicken was shortened to Golden Chick.

Golden Chick differentiated itself from its competitors Popeye Chicken, KFC and Church’s Chicken by creating its own original recipe for all-tenderloin chicken tenders. After more than 4 decades, this restaurant has gained a loyal following of diners whose palates are not satisfied with other chicken menus.

There are two choices of Kid’s meals, the Tender meal and the Chicken Leg Meal. For salads, customers can choose the Tender Salad, the Chicken Salad or just plain Salad. There are a lot more choices that Golden Chick offers including sides, extras, drinks, and party packs.

After capturing the discriminating tastes of Americans, Golden Chick has now turned its eyes overseas. It has flown all the way to Asia and has announced the opening of its first restaurant in Shanghai, China.

Together with Mark Parmerlee, Allan is a moving force in the Golden Chick’s global expansion in the last three years.

“We are delighted to introduce our favorite tastes from Texas to our new friends in Shanghai,” says Allen. “Our company has a modern, global approach to growth, but we also stay true to our famous Southern manners and treat every diner like family,” he explains.

“Offering guests a free ice cream cone or second roll are the little touches that help people feel at home when they dig in at Golden Chick,” he adds.

This move is made at a very opportune time. China’s latest craze is American-style crispy fried chicken. This food item has become a hot commodity in the eyes of the Chinese people. Fried chicken has been in the center of pop culture television in this country, making the people eager to sink their teeth into something similar.

This is not the first time that Golden Chick tried to conquer the other side of the world. It has already penetrated the Jordan market in the Middle East.

“Since our first overseas launch in Jordan has seen great success, we felt now was a great time to bring the brand to Shanghai,” says Mark Parmerlee. “I’d like to congratulate Allen and his team on a successful opening and look forward to many more developments abroad,” he adds.

Parmerlee is very careful in representing his brand to dining guests. This is one of the keys to his restaurant’s success, domestically, and internationally.