Rice is generally one of the blandest foods you can find, but not at Chipotle! The light, citrusy flavors of the mixed with the savory hint of cilantro makes for a perfect side or base for any Mexican-inspired meal. And while Chipotle is more transparent about its ingredients than most restaurants, there’s no way of knowing exactly what’s in the Cilantro Lime Rice they sell in stores. However, I’ve gotten as close as possible to the restaurant’s version with this copycat Chipotle Cilantro Lime Rice recipe. 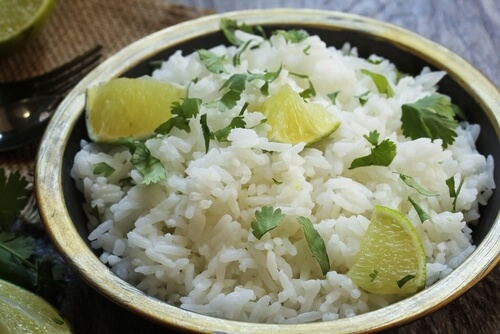 Chipotle’s white and brown rice are not flavored any different from each other – they are both cilantro lime, so you can choose which kind you’d rather make. This is a super simple recipe with clean, healthy ingredients. I always recommend using fresh herbs, lemon, and lime with this recipe. You can tell the difference between dried seasonings and bottled juices. If you’re going to take the time to make this at home, you might as well invest in the best ingredients. With that being said, you won’t regret taking a few minutes out of your day to recreate Chipotle Cilantro Lime rice with this recipe. Salud!

What are readers asking about the new Cilantro Lime Rice Chipotle recipe? If you’ve got questions, check out a few of our most frequently asked questions.

What is Chipotle rice made of?

Chipotle Cilantro Lime rice is made out of long grain or basmati rice – it can be made out of white rice or brown rice. The rice recipe also features lime juice, lemon juice, cilantro, salt, olive oil, and 1 bay leaf.

Does Chipotle put oil in their rice?

At the restaurant, Chipotle uses rice bran oil to cook their rice. In this rice recipe, I recommend olive or vegetable oil because they are both normal household items that you can use for other recipes.

Does Chipotle have rice without cilantro?

While Chipotle does not have white rice or brown rice pre-prepared without cilantro, you may be able to ask the workers to make some for you. Just be prepared to wait for it or to be told “no.” However, if you make our version of Chipotle Cilantro Lime rice, you can simply leave out the 3 tablespoons of freshly chopped cilantro, and the recipe will still work.