Taco Bell is an interesting fast food restaurant. It doesn’t serve the regular burgers and fries, but rather Mexican-inspired foods such as tacos, burritos, and nachos. In this article, we will go over the 5 best value meals at Taco Bell.

When you need to decide on what to have at Taco Bell, you should consider multiple things including price, nutrition, and taste. Although many things at Taco Bell are inexpensive, they can add up fast if you’re not careful enough.

Taco Bell offers low-calorie alternatives on their Fresco menu, but for sake of this article, we will leave those out so that we can compare their regular menu items instead. 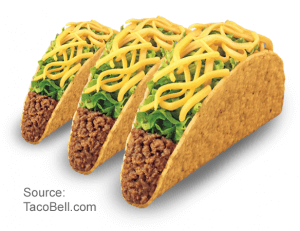 The Crunchy Tacos from Taco Bell are pretty much what you would expect. They are pretty tasty, crunchy, and if you add their fire sauce, can be very spicy. Each crunchy taco is about 99 cents so three of them would cost less than $3.00 before tax.

Each Crunchy Taco contains 170 calories, so for this entire meal it will be around 510 calories. Although it might seem like a lot if you’re dieting, it is actually pretty reasonable for the entire meal.

If you prefer to get the soft tacos instead, it will cost about 50 cents more and include 90 calories more as well. 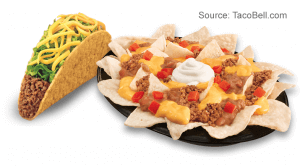 The Nachos Supreme is a tasty nacho meal from Taco Bell. It is composed of fresh tortilla chips, seasoned beef, beans, warm nacho cheese sauce, diced ripe tomatoes, and reduced-fat sour cream. It is literally an explosion of flavor in your mouth.

If 610 calories is a bit too high for your meal, you should consider the first meal as a better choice. 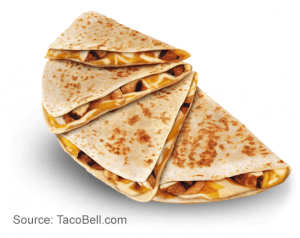 The Chicken Quesadilla is 520 calories with a whopping 27 grams of protein. The quesadilla will run you about $3.29 for chicken and $3.49 for the steak variation. We’d highly recommend chicken over the steak one though because it tastes better. 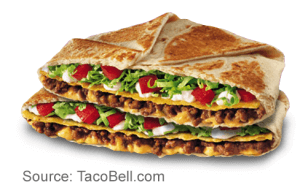 The beef Crunchwrap Supreme is one tasty meal from Taco Bell. Its ingredients include seasoned beef, warm nacho cheese sauce, crunchy tostada shell, reduced-fat sour cream, lettuce and tomatoes, and then wrapped up and grilled. The Crunchwrap Supreme offers a nice surprise that your taste buds are sure to appreciate.

The Crunchwrap Supreme is 530 calories, which is quite acceptable for the size of the meal. It will run you about $2.89 and that is the cheapest meal on this list. 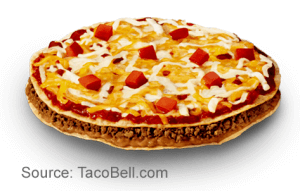 The Mexican Pizza will blow your mind if you have not tried it before. It is created from two crisp pizza shells with seasoned beef, beans, pizza sauce, melted three-cheese blend, and topped with diced ripe tomatoes. Although it is called a pizza, it is more similar to a Crunchwrap Supreme except it’s not wrapped all around and it has several different ingredients.

You’ve just read about the following value meals at Taco Bell including:

Remember, Taco Bell’s menu is pretty large so you should look over it and see if you can create a meal for yourself for cheaper price and lower calories than ones shown above.

If you are tired of Taco Bell’s food, we suggest you try Chipotle as your next Mexican-inspired fast food restaurant. In case you are wondering how it compares to Taco Bell, read our recent article Chipotle Vs. Taco Bell – Who Wins?

So what do you think about Taco Bell and its meals?  Which one is your favorite?  Let us know in the comments. 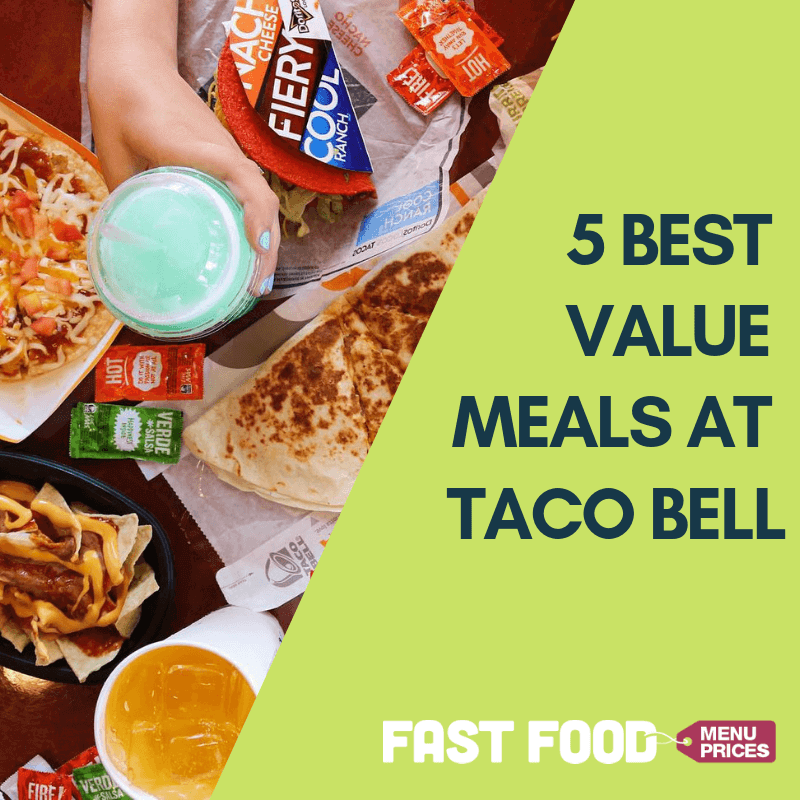