You are here: Fast Food Prices > Tim Hortons Coffee Ads Get a Following

In the world of marketing, businesses spend a lot of time and effort to come up with the perfect ad to get the positive attention of their target market. While not all ads get the attention they desire—some being negatively reacted to, each kind of advertisement gets at least a bit of attention.

Thankfully for Tim Hortons, their catchy new ad got the positive attention it needed to get Tim Hortons coffee noticed. When you put everything into consideration—how do you market coffee, really? A lot of people drink it on a daily basis. Does it even still need to be marketed? For those in the business sector and for Tim Hortons coffee in particular, they were able to answer these questions properly and their efforts paid out well.

A Brief Look in the History of Tim Hortons 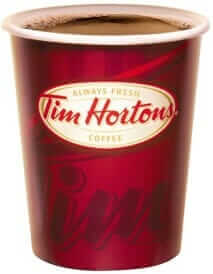 More properly known by its full name of Tim Horton’s Cafe and Bake Shop, this is a Canadian fast casual restaurant that has made its presence known in many countries all over the world. They are best known for their coffee as well as donuts since this pair goes so well together for many consumers.

Its very first store was opened in Hamilton, Ohio in 1964 and it was originally called Tim Horton Donuts. Later on, they were called “Tim Horton’s” and now, they are known as just “Tim Hortons” without the apostrophe. In 1992, they had a merger with Wendy’s and this helped establish more presence for their name. It helped increase their stability, and although this setup wasn’t permanent, it helped in making the business grow.

Late in 2005 and under the pressure from rival restaurants, Tim Hortons was sold by Wendy’s beginning only at 15%-18% as an initial public offering. This sale was completed in 2006. Come September, Wendy’s spun off the rest of the shares they had of Tim Hortons and soon after, Tim Hortons coffee was added to the benchmark stock-market indicator of Canada.

From their humble beginnings, Tim Hortons has seen a lot of marketing changes and has adapted to the needs and demands of their consumers. From once having been under Wendy’s, they are now a stable name alone and is making a positive impact on the consuming market because of the fresh products they serve that gets just the right appeal for coffee and donut lovers.

So What’s Up With the New Tim Hortons Coffee Ad?

Coffee is something most people drink and is considered as a morning staple for some. Tim Hortons coffee decided to take a good step by coming up with an interesting ad to entice their customers even further to have coffee and not just any coffee—but their coffee.

They recently produced a commercial which stars Sidney Crosby. It was meant to get to the hearts of Canadians on a more national note. However, one which Tim Hortons also achieved was a game so reminiscent of “Name that Tune” when their commercial was aired.

The ad was released early in January and after it was shown, a lot of consumers have been approaching the company and were asking about the song which was playing in the ad. The song in question is called “Let’s Run” and the consumers who enjoyed it so much went and made efforts to ask about it and see if they can find it. Trouble is, the song does not exist out of the commercial.

This kind of strategy is common for advertisers where they commission indie bands or specifically have songs made for them—even just for a 30-second commercial. This method of having a new song created for a commercial is a popular way to give the indie music creators to make money they don’t usually make. For the bigger companies hiring them, they are given the chance of having a fresh new sound which they can use to increase the recall for their brand. For Tim Hortons coffee in particular, this method paid off when it came to customer interaction and being able to pique their curiosity.

Since so many people were asking about it, Tim Hortons commissioned a full recording of the song “Let’s Run,” and they made it available for free on the popular music sharing website SoundCloud.

In the past, Tim Hortons had been using Mr. Crosby in a more sentimental way which speaks of how he played and similar things. The new commercial for Tim Hortons coffee released early this year has more of a spirited note to it. According to Rob Forbes who is the senior director of Tim Hortons marketing and national programs, “The whole relationship with hockey and how we’ve advertised it is really evolving.”

Despite having a subtle change on how they made the commercial, they were aiming to get to the consumer sentiment. Whether or not they were able to achieve this exact feat is yet to be determined but one thing is for sure—they surely got the attention of the people with the soundtrack they used. This is one success they can count on for taking that leap with making a commercial for the year.

For those who love breakfast items, Tim Hortons is the place to be. Apart from the different kinds of coffee they serve in convenient Single Serve setups, they also have hash browns, donuts, and even specialty cold drinks for when you want something more refreshing. If coffee isn’t your thing in the morning, you can enjoy their steeped and specialty tea for a change.

Their snacks and baked goods are perfect for office takeout goodies when you’re in a rush, and if you need fuller meals, they have paninis, sandwiches, and hot bowls too. Choosing from their products whether you were inspired to pay them a visit because of the commercial or for any other reason will give you a good dining experience each time. Check out their closest location in your area and enjoy their fresh offerings!