You are here: Fast Food Prices > The Squeaky Wheel Gets All-Day Breakfast at McDonald’s

The Squeaky Wheel Gets All-Day Breakfast at McDonald’s 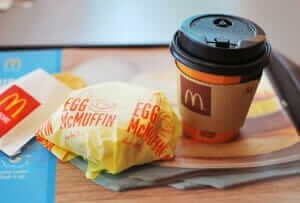 Some folks take McDonald’s breakfast very seriously. So seriously, in fact, that having McBreakfast for breakfast simply isn’t enough. After years of outrage at being denied an Egg McMuffin past the 10:30 a.m. cut-off, the McMasses took to social media to air their frustration at McDonald’s for restricting their breakfast to the morning hours. In 2015 alone, McDonald’s received around 120,000 tweets asking for all-day breakfast:

“Fight for the right for McDonald’s breakfast all day!”

“So we can roam Mars but McDonald’s can’t serve bfast all day 4 realz?”

“WHYYY CAN’T WE GET @MCDONALDS BREAKFAST ALL DAY WHYYYYYYYYY”

Through it all, McDonald’s tried to reason with their breakfast-lovin’ customer base, explaining that there just isn’t enough room on the grills to cook all of the menu options at once. Not surprisingly, their excuses fell on deaf ears, and the uproar continued.

McDismal Sales as a Catalyst for Change

But then came 2014, a year when sales growth came to a virtual stand-still or worse, and in March of 2015, a new CEO came aboard promising sweeping changes. The very next month, McDonald’s started testing all-day breakfast in some restaurants in the San Diego area, and the month after that they started testing in the Nashville market. In July, the Wall Street Journal got their hands on a secret memo sent to McDonald’s franchisees advising that the results of their all-day breakfast testing were encouraging, and to hold on tight, because a nationwide launch of breakfast for lunch could occur as early as October.

True to its word, the fast food giant began offering all-day breakfast all over the U.S. on Tuesday, October 6, 2015 in an effort to increase the bottom line and satiate their rabid breakfast fans. “This is the consumer’s idea,” said McDonald’s president Michael Andres. “That’s why I think this could be the catalyst for our turnaround.”

Not Good Enough for Some Fans…

Unfortunately for some McBreakfastEaters, the all-day breakfast menu is considerably more limited than the one available from dawn ’til mid-morning. You can get the All-Stars of breakfast like hashbrowns, hot cakes, sausage burritos, and McMuffins (in the North) and McBiscuits (in the South), but it just wasn’t practical to maintain the full breakfast menu all day.

This, of course, led to a lot of complaints as outraged breakfast zealots realized that they still couldn’t get their McGriddles, Big Breakfasts, or breakfast bagels past 10:30 a.m. One franchisee lamented having to explain to “irate customers” why the all-day breakfast menu is so limited. Another franchisee from McMuffin territory in the north explained that he had customers who were “furious” because they couldn’t get biscuits and felt that the whole all-day breakfast thing was a “sham.” You can’t say that McDonald’s fans aren’t a passionate bunch.

So McDonald’s once again scrambled to appease their more virulent customer base and began offering McGriddles in select markets–presumably the ones with the squeakiest wheels–in March of 2016.

…But Good Enough for Sales

Despite the limitations of the breakfast menu and the “irate” and “furious” customers whose lives, it would seem, depend on a late-afternoon McGriddle, the all-day breakfast paid off almost immediately. After the September 1 announcement that customers’ fervent prayers would be answered come October, McDonald’s stock rose from $93.47 to $116.44 per share, and as a result of the actual all-day breakfast rollout, fourth quarter sales jumped by 5.7 percent.

The all-day breakfast saga serves as proof positive that the will of the people can sway the way a business operates. Now, if we could just see similar results from our elected officials, we’d be sitting pretty.