You are here: Fast Food Prices > The Skinny on Fast Food Advertising

Have you ever been really hungry? Not just suffering from a bit of an appetite mind you, but really hungry; the not eating all day and suddenly realizing it kind of hungry. It’s easier than ever to make you want to eat something right in that moment. Usually though, probably 95% of the time, fast food advertising isn’t being aimed at people who are already starving.

Fast food commercials kind of need to make people want the food being advertised, even if they aren’t exactly hungry. They accomplish this lofty goal by utilizing a few tactics which always help to make a sale. 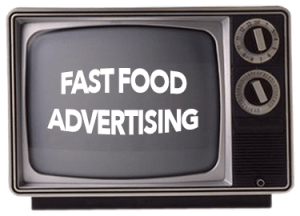 While they might not be wrestling naked in a pit of burgers, sexy people do help sell fast food products. Any way to get someone going and giving a positive response during your sales spiel, even if the response is for something else altogether, can help to close a sale. People don’t think like normal when they’re aroused, neither men nor women, a fact many advertising agencies regularly utilize to help boost their bottom line. It’s not just scantily clad men and women of a young age and great physical shape that make up fast food advertising though.

When you consider the average person who makes a habit of eating fast food regularly, what do you get? Someone who’s probably overweight, definitely not in the best shape of their life and probably lacking in a few key nutrients, that’s what you get. Someone who probably has high blood pressure thanks to all that salt too. The thing is, fast food commercials are full of perfectly healthy people who look like they’ve never been fat before – people who appear to love the fast food they’re eating but obviously don’t regularly eat it. Once you see through this major fast food fallacy, their ads don’t tend to work so well.

What You See May Not Be What You Get

Many fast food companies will advertise a particular item, let’s say a sandwich, saying that it’s a great low calorie alternative to other fast food meals. Occasionally McDonald’s and Burger King do this to try and drum up more sales but other restaurants do it too. However, the sandwich they’re advertising and the sandwich you get in the restaurant might not be the same thing. There could be fattening sauces, sides, sodas and more that add to the total calories in a meal.

The Commercials Make You Want Food

Advertising is almost an evil entity when you think about how intimate it tries to make a company with the average person. By filling fast food commercials with scenes that make people remember happy times in their lives, times they were probably eating, they make them want to eat again. Certain musical selections and highly suggestive language can also pique a person’s interest in eating. When you couple that with a fast food restaurant staring you in the face and telling you where to spend your money, it’s almost too easy for them.

While keeping in mind that these are advertising practices used by just about any company to sell just about anything, you might be ready to get past it and just eat the food you want. However, there are alternatives to the highly advertised fat and sodium bombs which are the average fast food meal. Not all fast food is necessarily bad for you but you’re not going to see those companies advertising their salads and soups like they do with their big ticket burgers and other popular food items. Having a healthier fast food experience is all up to you, the consumer.

You know that if you keep eating meals with thousands of calories in them, you’re going to bloat up and get fat. Anyone who does that would face the same result unless they were working off thousands of calories a day with various activities. It might be tempting to reach for the super, plus, mega and ultra sized meals but if you could eat a little less of the bad stuff in one sitting, the effects would be lessened. Bigger portions don’t kill the fast food companies – they kill you.

Salads really aren’t a bad option and many fast food commercials do feature them, though not with the same prominence as other food items. Some restaurants even have various dressings and top their salads with cheeses and meats, so it’s more like a meal than what you traditionally think of when you hear the word “salad”. Adding more green to your average fast food meal can cut down the calories significantly by filling you up with fiber instead of more greasy meat and potatoes. It’s probably the best option for people who want to keep eating fast but not quite so unhealthy.

On sandwiches and salads both, you could cut out a lot of fat, cholesterol and calories by getting your food without the usual sauces. If the food was good to begin with, it won’t suffer too much from a reduction in the amount of straight fat. If you find you can’t stand a salad or sandwich after getting rid of the sauce then you probably shouldn’t be eating that food anyhow. When you consider how many calories are in a serving of ranch dressing, then how many servings make it onto a bacon ranch sandwich, you realize how many calories you can save.

While fast food advertising is bent on getting consumer dollars, the same can be said of any other business with a good or service to sell. Their methods might be downright shady but that doesn’t mean you need to bite at every single food item offered to you on the television, radio or Internet. By making better choices for yourself and sticking with the equally fast but much healthier alternatives offered at many fast food joints, your habits can improve. Fast food restaurants aren’t going to make that any easier for you though.