Taco Bell’s menu features a wide range of Tex-Mex foods like tacos, burritos, quesadillas, nachos, and other specialty items. Compared to a lot of fast food restaurants out there, Taco Bell serves fresher and healthier options at very affordable prices.

Here’s a list of Taco Bell’s Most Popular Menu Choices:

This is what you should order when you are having a hard time deciding on whether you want something crunchy or something soft. Kudos to Taco Bell for creating this mix of soft and warm flour tortillas that wrap around the crunchy taco, which is filled with seasoned beef, fresh lettuce and tomatoes, lots of zesty cheese, and reduced fat sour cream. To add more goodness to this creation, Taco Bell put refried beans in between the tortilla and taco shell. Originally a promotional item in 1995, it now boasts a permanent place on the menu since 2006.

One of the newest additions to Taco Bell’s menu is a hybrid of quesadilla and burrito. Quesarito has both of the components of a quesadilla and burrito all rolled into one filling meal. It is filled with seasoned beef, premium Latin rice, cheese, reduced fat sour cream, nacho cheese sauce, and chipotle sauce. Although this item is not a Taco Bell original creation (Chipotle has this on their secret menu even before Taco Bell introduced it in 2011), they are still credited as the ones who made Quesarito a mainstream food item.

This is vegetarian friendly item is proof that Taco Bell is looking for ways to give healthier options to their consumers. This meatless burrito is huge enough to compensate the absence of meat. It contains 7 ingredients (7 Layer): refried beans, guacamole, premium Latin rice, fresh lettuce and tomatoes, cheese, and reduced fat sour cream. 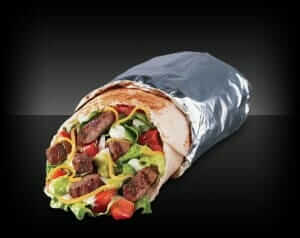 Think of this dish as Taco Bell’s attempt to incorporate American with Tex-Mex food. So instead of the usual seasoned ground beef, steak strips are used instead. This item also consists of fresh lettuce and tomatoes, lots of cheese, and avocado ranch sauce (used to be lime sauce). This soft taco is very refreshing to eat. The juiciness and saltiness of the steak is perfectly complimented by the avocado ranch sauce.

This is one of the most popular items in Taco Bell. This burrito consists of seasoned beef, refried beans, fresh lettuce and tomatoes, onions, cheese, red sauce, and reduced fat sour cream all rolled up in a warm flour tortilla. 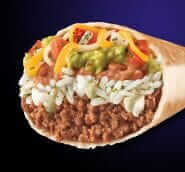 Another Taco Bell Original and, according to their Chief Marketing Officer, Mr. Bill Pearce, the XXL Grilled Stuft Burrito is one of the most popular items on the menu. This burrito is distinctively different from other burritos because its tortilla is first grilled using a Grill Press. This dish contains seasoned beef, premium Latin rice, pico de gallo, avocado ranch sauce, guacamole, refried beans, cheese, and reduced fat sour cream.

This item has been removed from Taco Bell’s regular menu (but it is still available in some locations). This burrito is filled with ground beef that is mixed with a special sauce (that’s why it is tastier), hot chili sauce and sharp cheddar cheese all rolled in a warm tortilla. It is really a shame that we can’t still get it at all stores.

Taco Bell’s Quesadilla is a simple Mexican meal that only consists of a grilled flour tortilla, a huge portion of three-cheese blend, creamy and slightly spicy jalapeno sauce, and your choice of shredded grilled chicken or steak strips. This item was introduced in 2002 and supposed to be just a promotional item, but due to overwhelming demand from customers, it was made a regular item in Taco Bell’s menu. 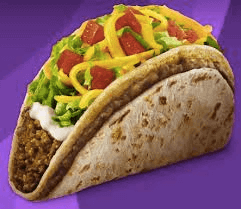 Another one of Taco Bell’s originals, this extremely cheesy delicacy is made with a warm soft tortilla that wraps a crunchy taco shell which is filled with seasoned beef, fresh lettuce, spicy ranch sauce, and loads of zesty cheese. As if it is not cheesy enough, more melted three-cheese blend is placed in between the tortilla and the taco.
I don’t know about you, but I will forever be thankful for these Taco Bell creations are always available to give us a quick craving fix any time of the day or night.