For a long while Tex-Mex cuisine was on top of the world. Just about everywhere you go you’ll find restaurants and street vendors selling fajitas, tacos, and others. The Tex-Mex craze might have died down a little bit in recent years but the original Tex-Mex establishment, Taco Cabana, is still going strong.

Taco Cabana has been there since the very beginning and is one of the pioneering establishments that brought Mexican dishes out from the south for the whole country to experience. The one thing that separates Taco Cabana from the competition is its use of fresh ingredients and its 24/7 service.

Most Tex-Mex restaurants use pre-packaged food which is why they are heavy on calories and bad cholesterol. Taco Cabana avoids this as much as possible by using organic ingredients freshly picked from the market.

Taco Cabana started when Felix Stehling purchased a vacated Dairy Queen building right across the street from his parents’ bar in San Antonio, Texas. The family needed extra space for a parking lot and the empty Dairy Queen area was the perfect fit. 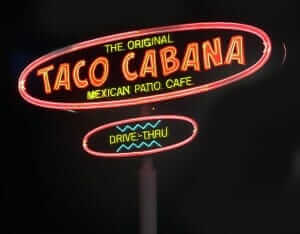 The open design of the old establishment gave a patio café type of ambiance and Felix decided to use it to his advantage by opening a taco stand. Henceforth, Taco Cabana opened its doors in September 1978. His wife, Billy Jo, was responsible for the restaurant’s décor.

The very next day however, Felix discovered all of the patio furniture had been stolen. To remedy this he decided to keep Taco Cabana open 24 hours a day.

Soon the healthy Tex-Mex dishes of Taco Cabana was clicking and growing, with chains popping up all over San Antonio. To keep the business well-managed and still in family hands, Felix asked his two brothers for help.

Through their combined skills the three brothers expanded the business until 1986 when creative differences regarding the future of the business caused them to disband. The two brothers left and it was up to Felix to resume control.

The following year, Felix hired entrepreneur Richard Cervera as the company’s new executive vice president. Within three years the company had begun to expand all throughout Texas and was beginning to branch out to neighboring states.

By the mid-1990s, Cervera escalated to the position of president and showed interest in franchising. By 1992 the company went public and franchising for the fast-casual restaurant began.

Felix stepped down from the chairman’s position in 1994 and was succeeded by Cervera. Cervera resigned the following year after disputes with the company’s poor stock performance and was replaced by Stephen Clark.

From 1995 to 2000 the company invested in re-branding its image, design, and services. Out of options, the company became a subsidiary to the Carrols Restaurant Corporation, which is still one of the largest Burger King franchises and is also the owner of Pollo Tropical.

Right after the new acquisition, Clark left the company and was succeeded by Mike Biviano, a company employee of the Carrols Restaurant Corporation since way back in 1973.

As of today, there are now over 160 company-owned branches all over the country.

So what sells the most in Taco Cabana? Taco Cabana’s Super Nachos is one that everyone has to try at least once. This isn’t the typical nachos that get people horridly fat and unhealthy – these utilize refried beans, sour cream, guacamole, and your choice of either chicken or beef fillings.

The Beans and Cheese Taco is one of the main best sellers since its doors first opened in 1978. It’s a simple idea that followed basic Mexican recipes but the healthy and fresh ingredient used is what makes it stand out.

In September 2013 the company re-opened the original Taco Cabana store from midtown San Antonio. The original store had been closed for several years but the campaign to remodel and re-open it launched alongside the company’s 35th anniversary.

Coming from a military-centric city, Taco Cabana has always been supportive of the US military. It has been a constant charity figure for the Warrior and Family Support Center which aims to aid wounded soldiers. As a matter of fact, Taco Cabana has been an active fundraiser for the past few years.

Taco Cabana also offers a 20% to any military serviceman wearing his or her uniform or has their ID with them.

Another interesting fact is that Taco Cabana has been re-renovating its image since 2012 to reflect a blend of the original 1978 retro-look with today’s modern standards while also incorporating an authentic Mexican flavor. It’s a nice touch that sets it apart from all the other “fresh and healthy” establishments today.