After a short stint in Tokyo the 80s, the Mexican fast food chain Taco Bell returns to Japan, this time to much anticipation. Over a hundred people waited in line and camped out for the night in the Shibuya shopping district just to be the first ones to taste tacos and burritos. By 10 a.m., doors opened and an English-speaking greeter and the Taco Bell mascot led customers in, giving the first 100 patrons their free Taco Bell T-shirt. If that isn’t special, wait till you see the back of the commemorative Taco Bell T-shirt, where the queue numbers between one and 100 is displayed, just awesome marketing and customer love, right there.

According to Melissa Lora, president of Taco Bell International, choosing the right location in Japan was easy, “Shibuya has so much energy, it’s very youthful, and you know our brand is a very youthful brand,” “So we thought Shibuya would be the perfect area to introduce ourselves to the Tokyo market.”

The new Taco Bell restaurant in Shibuya features an open kitchen with a weird California motif of battered brick walls, and pretty much everything else is adorned in strong fluorescent purple. Also quite noticeable when you queue in line is the wacky rap music playing on loop in the background. Though the rap video was released way ahead of the restaurant’s opening , the video shows two funky rappers, a crazy Japanese rap duo called the Ascetic Boys, wearing obligatory hipster caps and heavy bling while rapping about the new Taco Bell Tokyo. 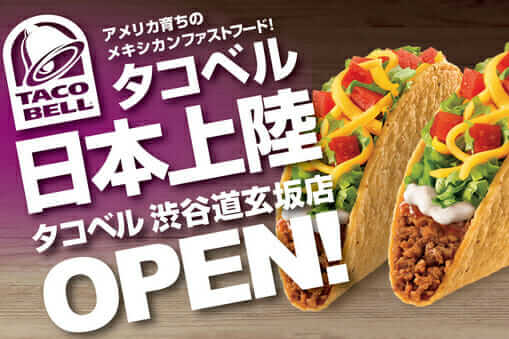 Call it an overly hyped re-entry into Japan’s fickle fast-food market, through a franchise agreement with Asrapport Dining Corporation, a known Japanese company of restaurant franchises. Taco Bell can truly fill in the huge lack of Mexican food choices in Japan. Taco Bell has its origins in Downey, California, it was started by Glen Bell in the 1960s, and today it has 6,000 global locations.

If the Japanese don’t warm up to the menu, the restaurant may easily close shop like burger giants, Wendy’s and Burger King, which pulled the plug on their Tokyo outlets several years ago, but the two were still able to make a re-entry, Burger King eventually made a splash in Tokyo with their charcoal-black hamburgers.

Though the word Taco literally means ‘octopi’ or refers to a traditional kite in Japanese, Taco Bell is reinventing the word in Tokyo with its range of tacos on the menu.

Expect menu regulars, those mouth-watering crunchy soft tacos and burritos, plus a local twist of a handful of Japan-only food items, the sumptuous Taco Rice Bowl, the yummy Shrimp Avocado Burrito with wasabi sauce, and the dessert called Ice Cream Tostadas, a cold crunchy delight of fried tortillas sprinkled with cinnamon and sugar. However, portions will be downsized on some menu items to fit the Japanese palate; small servings are in for the Taco Bell’s Nachos Bell Grande, taco salads and Taco Bell Grande. Though Taco Bell is launching its notorious Diablo sauce this coming May, the store sauce in general won’t be quite that flaming hot in Japan. And yes, there are no chopsticks in Taco Bell Japan either as the Japanese prefer using forks when eating out at Western-style restaurants.

Budget-wise you might be in for a shock if you’re used to US prices, things get a bit pricey in general when you’re in Japan. Classic items on the menu such as the taco start at 320 yen ($2.67) and 500 yen ($4.2) for a burrito. The menu rates are consistent with other fast-food joints in Japan, so expect your average visit to cost you around $4.24 to $4.55.

But Taco Bell Tokyo is just the first stop, the company plans to open up more stores in regional prefectures. However, unlike Taco Bell in America, Taco Bell Tokyo will not serve breakfast.

Taco Bell is also making a social savvy move by introducing a customer loyalty mobile app that lets hungry customers order up and pay for the meal before coming in the door.

So the first day opening of Taco Bell in Japan went really well and those who lined-up early said they were pleased with the free Tacos and the shirt, more of them stayed to order extra and even have their selfies taken with the mascot Taco Man. Social media was soon on fire with love for Taco Bell Japan particularly the Westerners and tourists who hadn’t had Taco Bell in a long time. As for the Japanese, they are curiously pique to try out the tacos at Shibuya, a fresh change from the usual array of US fast-foods that only offer burgers and fries. Looks like Taco bell will be staying for good in Tokyo this second time around.