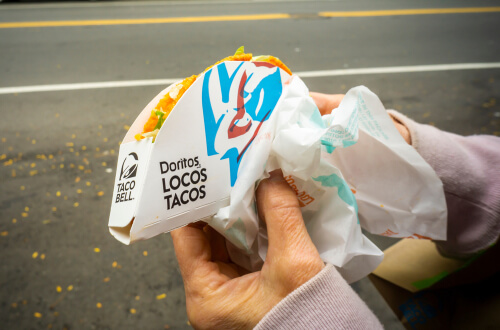 In honor of the 2020 World Series, Taco Bell is serving up free tacos as a part of their “Steal a Base, Steal a Taco” promotion. The Mexican fast food chain announced they would give away free Doritos Locos Tacos to all customers once the first base was stolen in the World Series. You can thank Los Angeles Dodgers outfielder Mookie Betts for the freebie, who stole the first base of this year’s series yesterday. Anyone can snag – or should we say steal – their free Doritos Locos on Wednesday, October 28. All you have to do is visit your local Taco Bell; there’s no purchase necessary.

If you’d like a free taco before then, sign up for the fast food chain’s loyalty rewards program. You’ll receive a Doritos Locos Taco free of charge just for starting an account, and you’ll also get your free taco next week, too.  The loyalty program has only been around since June of this year, so expect to see plenty more freebies and deals if you join.

Taco Bell’s “Steal a Base, Steal a Taco” promotion may sound familiar – that’s because this isn’t the first time the franchise has partnered with the MLB to host the giveaway during the World Series.

Noah Garden, MLB Chief Revenue Officer stated, “Steal a Base, Steal a Taco has become a tradition tied to the World Series and we’re thrilled to partner with Taco Bell to bring baseball fans even more to look forward to through this extraordinary postseason.”

To find more ways to save on fast food, check out these other food freebies.