Taco Bell’s menu, like all fast food chains, is loaded with a lot of unhealthy food choices. Just look at their Cheesy Gordita Crunch and you’ll see why. It contains 500 calories and has over 2,000mg of sodium. It’s like eating two unhealthy tacos in one meal. But there are Taco Bell menu items that are fine to eat even when you’re watching your diet.

If you want to step into a Taco Bell store now and make sure you don’t eat an innocent-looking taco that can ruin your diet, you might want to consider some of the following menu selections: 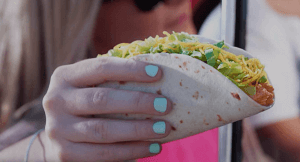 5. Bean Burrito – not every menu item from Taco Bell is a literal taco. Take the Bean Burrito for example, which has 370 calories and just over 1,000mg of sodium. It’s nowhere near as healthy as the tacos listed above but it does make for a good argument for those who really want to eat a burrito. The refried beans are a customer favorite and are preferable to the black beans option.

6. Chipotle Chicken Loaded Griller Burrito – this is arguably the healthiest burrito you can get from Taco Bell. It has 350 calories and less than 900mg sodium and only 16g of fat. Add in the fact that it’s delicious as you could ever hope for thanks to its inclusion of chicken and you’ve got a winning formula right here.

We should also mention black beans which are without a doubt the best side dish you can order from the list of Taco Bell menu items. They’re good for the heart and the brain and they only contain roughly 80 calories.

If you’re looking for something healthy and you love Mexican food, well, now you know where to go.