You are here: Fast Food Prices > The Scoop on the McDonald’s and Heinz Ketchup Breakup

For a lot of people, little sachets of Heinz ketchup are just about the most perfect things they can ask for when in McDonald’s. In fact, for certified McDonald’s fans the world over, the ketchup sachets they are given in McDonald’s are just as iconic as the Golden Arches itself and there really is no need to wonder why. After all, the Heinz brand has been part of the McDonald’s for close to 40 years.

McDonald’s and Heinz are two iconic American brands and their relationship was something destined to go on for 40 more years. Iconic America fries with iconic American ketchup- it really was a match made in heaven.

Until the Burger King stepped up to the plate.

Last week, McDonald’s announced they would end their 40-year relationship with Heinz ketchup saying that it was part of a plan to transition to another ketchup maker due to recent management changes at Heinz.

Now this leads you to wonder what could be so bad about management changes that it would actually end a 40-year relationship and the finger points to one man named: Bernardo Hees who just happened to be a former chief executive from Burger King.

Burger King is one of McDonald’s biggest rivals and so it makes sense why they would take umbrage and the installation of a Burger King chief executive over at Heinz. Since they can’t get the person fired, they decided to take their business somewhere else. Being one of the biggest fast food chains in the world, Heinz is sure to feel the impact of this breakup.

McDonald’s French fries fans it seems will have to adjust their palates when it comes to ordering their fries. After all, unless they bring their fries home they will no longer have the use of Heinz ketchup at McDonald’s restaurants.

What fans want to know though is this: Are McDonald’s and Heinz ketchup over for good? Surely, a 40-year relationship like that cannot end in just the blink of an eye? As a matter of fact, such break up has happened before and below are some instances of similar McDonald’s/Heinz breakups.

Heinz Ketchup and McDonald’s Have Broken Up Before. 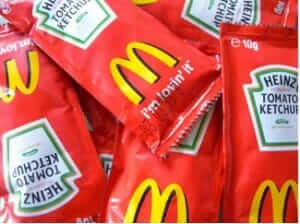 Back in the early 70’s, most of the ketchup used in McDonald’s already came from Heinz but in ’73, a tomato shortage came about and Heinz decided to place an emphasis on providing for their glass bottle customers as opposed to their bulk food accounts like McDonald’s. Of course, McDonald’s didn’t take this well and terminated their agreement. According to a Heinz executive in a 2006 interview with the Wall Street Journal, they have been on the outside looking in since that happening.

Indeed, Heinz investors coaxed and pressured the company to prioritize McDonald’s when it came to their supply chain.

The breakup seems like a massive blow but do you know that unless you live in Minneapolis or Pittsburgh, you really won’t notice the difference in ketchup brands. They only use Heinz ketchup in those two areas and the rest of the country has to make do with their in-house brand of ketchup.

So losing the US market isn’t too big a deal for Heinz but the company will lose out on profits from emerging countries since these markets make up 66% of its sales and where Heinz had had more success in their business. When talking about Heinz percentage of total sales, the North America market only makes up 40% and it is overseas where they really make a killing since most experts estimate that it is worth about $110 billion.

McDonald’s was a Small Part of the Heinz Ketchup Business

McDonald’s won’t really give out the numbers just yet but in a 2006 report, it was said that a total 260 million pounds of ketchup were consumed by McDonald’s customers and that is just in the US and only a small portion of that was Heinz ketchup. Just for comparison’s sake, Heinz says that it sells about 650 million bottles of ketchup per year and that number doesn’t even include the amount they sell to bulk fast food clients.

The company has really grown far beyond its horseradish roots and while ketchups and sauces are the largest core category of Heinz, the ketchup itself isn’t the largest product. Now the company produces many more products and owns lines of other food products like ore-idea potatoes and diet food like Smart Ones. This isn’t to say they will not miss the profit from McDonald’s but rather, the loss of McDonald’s will not likely put them out of business.

The Rivals are Really Massive

Heinz doesn’t really have too much of a competition and the in-house brand of ketchup at McDonald’s may be the second biggest brand. ConAgra Hunt is the company responsible for McDonald’s in-house ketchup and they reportedly made did about $69.5 million between May 2011 and 2013 while Heinz made about $5 billion in sales.

McDonald’s will not really suffer since they do use an in-house brand of ketchup and the makers are sure to get a boost in sales. However, the appointment of the former Burger King chief executive has had some people wondering if maybe this means Heinz ketchup may be working with royalty soon. After all, Burger King does serve fries and what better way to debut their new “satisfries” product than to reveal it has forged a partnership with Heinz. Of course, that is all speculation and no one really knows what will happen since the news is quite fresh. However, it has to be said that through all of this, McDonald’s customers will still be able to enjoy delicious fries even if they have to make use of the in-house brand. If you really want Heinz, by all means bring your own bottle or perhaps eat your fried at home. Just because McDonald’s will not use Heinz any more doesn’t mean you can’t.