You are here: Fast Food Prices > Noodles and Company: They’re Not Just About Delicious Noodles

Broomfield in Colorado is not exactly a place where noodle dishes would be common, right? Wrong. Noodles and Company has been thriving as the restaurant with the fast-casual ambience to reckon with since 1995 when Aaron Kennedy opened it, albeit after overhauling it. From a $300,000 in revenue worth in 1996 to $300 million last year, Noodles and Company now as 339 locations, several of them franchises.

Kennedy, an erstwhile marketing executive of Pepsi Cola, conceived the idea after a meal in New York’s Greenwich Village. Kennedy begun developing several recipes in the kitchen of his mother-in-law with Ross Kamens and chef Joe Serafin sometime in 1994. In October of the following year, Noodles and Company opened in Denver’s neighborhood of Cherry Creek in Colorado.

American and international noodle dishes, salads, pastas, soups, and sandwiches are offered at Noodles and Company, as well as desserts like Rice Krispies Treats and flatbreads. Pastas come as vegetarian but has options of shrimp, beef, chicken, and even tofu toppings. The flatbread is the Latin pork adobo flavored with tomatoes that are fire-roasted, Fresno peppers, organic pork, cheese, and cumin all spread on flatbread, toasted, and seasoned with cilantro and fresh lime.

Considered a “fast casual” restaurant concept (between casual dining and fast food service), Noodles and Company customers place their orders at the counter but are served at their tables between five and seven minutes after ordering, albeit orders can also be for-here, online or to-go.

“Your World Kitchen” was introduced in 2013 as their slogan, even as Noodles and Company restaurants have retained recycled bamboo furniture, soft lighting, and community tables as well as bench seating typical of the ambiance of most Asian-themed restaurants. 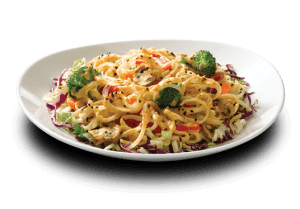 True to its slogan, Noodles and Company has the following international noodle dishes that are considered favorites in their countries of origin as well: 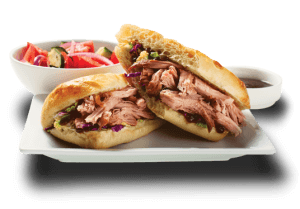 Meals at Noodles and Company also come as hearty sandwiches, all served with a choice of side soup (Thai Curry, Chicken Noodle or Tomato Basil Bisque) or side salad (Tomato Cucumber, Tossed Green or Caesar):

Kudos from Parents and Health Magazines

Supplementing the menus of Noodles and Company restaurants in 2002 were seasonal items as well as the addition of entrees sans noodles in 2004.

Whole grain fettuccine was introduced in Noodles and Company restaurants in 2005 and organic pork as an option for meat eaters in 2012. Gluten-free fusilli pasta was added to the menu in April 2013.

Health Magazine has included Noodles and Company in its Top Ten healthiest fast food-type restaurants, as well as one of the best family-type restaurants as rated by Parents Magazine.

Noodles and Company restaurants don’t have can openers, microwave ovens or freezers, a testament to their use of fresh produce and ingredients in the preparation and cooking of their cuisine.