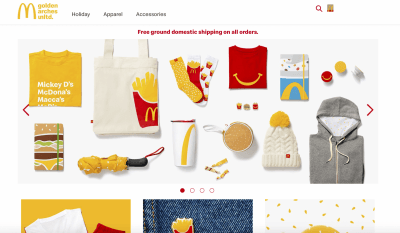 With prices ranging from $10 to $65, McDonald’s is making it affordable to pick up the perfect gift for the McDonald’s fans in your life. Customers wishing to pick up items from the new merch store are advised to act quickly as several items from Gold Arches Unlimited were already sold out just hours after the initial launch. However, McDonald’s has promised to restock and add new items to the merch store in the near future.

While this is the company’s first permanent online merch store, McDonald’s is certainly no stranger to merchandising. McDonald’s has partnered with various fashion brands in the past, giving customers the opportunity to get their hands on limited-edition merchandise.  In a press release, Senior Vice President, Global Marketing at McDonald’s Corporation, Colin Mitchell stated, “McDonald’s has been ingrained in the fabric of culture for years, and there’s a long history of fans wearing our brand with pride.” In recent times, the company allowed customers who ordered through the Uber Eats app the opportunity to get their hands on limited-edition merch through their McDelivery program.

Recently we have seen several other restaurant chains chime in on the now popular online merch trend. Just over one week ago, Red Lobster announced the launch of their first-ever online merch store. On November 26th, Taco Bell also announced that its Holiday Hot Sauce Onesie, which was a huge hit in 2018, would be returning to its online store in 2019.