You are here: Fast Food Prices > Little Caesars Future in the Pizza Industry

While the fast-food industry is estimated to be at about $200 billion, there are simply too many competitors angling to take a slice of such a large pie. Nowadays, pizza chains are at a bit of a disadvantage. They can’t really go far beyond their Italian menu, unlike burger joints which can also offer pork and chicken sandwiches. And for Little Caesars in particular, the race according to some experts is all about Pizza Hut and Domino’s.

In fact, as recently as a few years ago some experts believed that Papa John’s was the #3 in the American pizza industry. The most recent estimates have updated the standings so that Papa John’s is now at #4, just below Little Caesars.

So does that mean that Little Caesars is doomed to sit on the sidelines as the major powers duke it out for pizza supremacy? Judging from the most recent events, Little Caesars is actually on the march itself to gain a greater presence in the pizza arena. 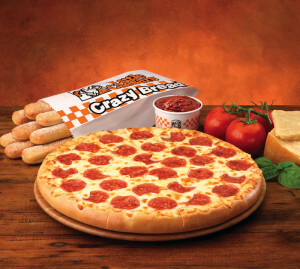 It all started back in 1959, when Mike and Marian Ilitch started the store in a strip mall. Interestingly enough, that original location is still standing. Their rise to fame started when their catchphrase “Pizza! Pizza!” became popular. The catchphrase referred to just how affordable Little Caesars pizza was. You could actually buy two pizzas for the price of one.

When things began to go sour in the 1990s, Hot-N-Ready saved the company. This was a large pepperoni pizza sold for $5. The idea became so popular that Little Caesars incorporated the principle in its current lineup. And as its focus turned more towards carryout, Little Caesars became the biggest carryout pizza chain in the US.

First of all, let’s take a look at some important facts regarding the current standing of Little Caesars. The sales figure for Little Caesars for 2012 is estimated at $2.9 billion, which is about 20% more than the Papa John’s figures at $2.4 billion.

The key word here is estimated, because some experts believe that these sales figures for Little Caesars are a little bit on the low side. There were even some news reports saying that the Ilitch family, which still owns the Little Caesars company to this day, have become a bit miffed about being considered smaller than Papa John’s. But part of that is perhaps their fault, because they have always been so secretive about their sales and other financial statistics.

The Big Two here is Pizza Hut, with a commanding $5.7 billion in sales, followed by Domino’s at $3.55 billion. Now some may be thinking that Domino’s and Pizza Hut are trying for the top spot while Little Caesars is busy trying to defend its #3 spot from Papa John’s.

But there are some facts which may suggest that Little Caesars is cautiously trying not just to really outsell Papa John’s. The company may be trying to aim a little higher. They may want to make it a three-way race to the top.

A Glimpse into the Future

So how will Little Caesars try to go bigger? According to some industry insiders, the Little Caesars method is to simply emphasize what they have always championed since it introduced the Pizza! Pizza! catchphrase back in 1979.

The pizza industry in the US is now fragmenting. Now the customer base of the various different pizza chains have become much more distinctive. That means the pizza chains are positioning themselves for a particular type of consumer. For Pizza Hut, they have added catering. Domino’s, meanwhile, turned to pasta and sandwich delivery.

With Papa John’s, the recent thrust of their marketing efforts is to define them as a gourmet pizza brand. With Little Caesars, it’s more of the same: affordability.

It has been a few years now since the economy has turned for the worse. And there are really no indications that it’s going to be much better anytime soon. And that means the Little Caesars approach makes a whole lot of sense. With a bad economy, the one with most to gain are those who can offer the most savings. That just makes sense.

And that’s why for a few years now Little Caesars have been accumulating quite a few accolades in the industry. It is considered to be the fastest growing major national pizza chain not just in the US but in the world, based on both new stores and US sales. It is also in the top 5 in Canada in terms of customer service, according to surveys.

And that’s a great formula for success in the pizza industry. Give people double the number of pizzas for the same amount of money. Then add great customer service. That almost always equals phenomenal growth, not just in North America but perhaps throughout the world. For Little Caesars, there’s really no Ides of March in sight.