Fast-food is one of the biggest niches in the world, if you’re to believe the latest estimates it may actually be a $200 billion industry. The competition is fierce, and the tastes and preferences of the consumer population are ever-changing. Wendy’s continues its efforts to position itself as the best provider of fast food in North America and all over the world. And that means right now Wendy’s is offering something new.

While most other fast-food chains are trumpeting their new burgers and fries, Wendy’s is going after women and the so-called millennials. These groups are much more health-conscious than the average folks, and that means Wendy’s will be offering new salads to attract their attention.

This time, the new items in the Wendy’s menu is a pair of truly scrumptious yet healthy salads. They’re called the Asian Cashew Chicken Salad and the BBQ Ranch Chicken Salad. This is simply the latest in the Wendy’s salad lineup, which has a long and illustrious history. Wendy’s made its mark by becoming the first national fast-food chain to feature a salad bar, and that was 35 years ago.

The practice was discontinued by 1997, ostensibly to focus more on portable salads sold through drive-through. Eventually Wendy’s lost its claim to the title of the king of salads, as people began to favor the salad offerings of the fast-food chain’s more upscale rivals. Now, Wendy’s want the title back. 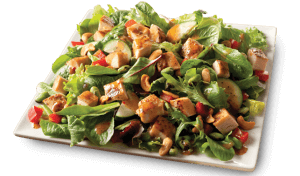 The two new salads are a great start for Wendy’s new efforts for the salad crown. The Asian Cashew Chicken Salad features grilled chicken along with spicy roasted cashews. It also includes fire-roasted edamame as well. Finally, there’s the Marzetti® Simply Dressed® Light Spicy Asian Chili Vinaigrette which contains roasted peanuts. Now you no longer have any excuse about not eating salad because it’s bland.

With the BBQ Ranch Chicken Salad, the grilled chicken is the same. But now it’s accompanied by bacon that’s been smoked on applewood and corn that’s been roasted on a fire. To top it all off, you also have the Marzetti® Simply Dressed® BBQ Ranch Dressing. This can be the perfect companion to any meal. In fact, it’s already a meal in itself.

Health Benefits of the New Salads

The new salads are better by any standards. They have 25% fewer grams of fat. The level of saturated fats in the new salads is 40% lower. With sodium (another health no-no), the new salads have 19% less. 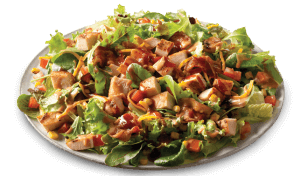 In addition to the new salads, Wendy’s is also offering new veggies such as red peppers and cucumbers to the side salads. Although salads have never been really the bestsellers at Wendy’s, more salads are now being consumed than ever before.

There’s a side benefit to offering these healthier salads for Wendy’s. Even though many of its customers still prefer the traditional burger and chicken sandwiches, there’s an increased perception that Wendy’s is becoming healthier. More people also believe that Wendy’s is making an effort to provide for the needs and preferences of the current crop of fast food customers.

That’s why Wendy’s now has a breakfast lineup, which is fairly new since they first tried it back in the 1980s. Now, the breakfast lineup includes a lot of staples. There are different kinds of biscuits, including sausage and chicken biscuit. There’s Panini and egg sandwich. You can also get an oatmeal bar, potatoes, or a burrito.

Wendy’s will always have something to offer as seasonal limited-time items. It will also continue to roll-out new and wonderful menu items that have never been seen before. Which means that there’s one thing for sure when it comes to the menu items from Wendy: There will be always something new to discover when you come into Wendy’s. And as for those who seek comfort on the old familiar sandwiches and salads, the perennial favorites will always be there to offer solace and comfort!