You are here: Fast Food Prices > KFC is Out to Win the Spice Wars

“Spartans! Ready your breakfast and eat hearty for tonight, we dine in hell!” by King Leonidas from the movie “300”

You don’t really have to go to hell to taste the hottest and the spiciest. You can just visit KFC, Korea and order their Fire Double Down Maxx.

Fire Double Down Maxx is made up of two pieces of spicy fried chicken fillets as the top and bottom sandwich breading for a slice of tomato and cheese dressed in spicy chili sauce.

Fire Double Down Maxx’s tomato red appearance is enough to get you drinking glasses of water even before you take your first bite.

KFC started their aggressive recreation of the sandwich with their Double Down concept where instead of bread KFC uses chicken fillets. Now, KFC Korea is taking the first step in redefining the word “spicy” with its Fire Double Down Max.

Are we sure that we’re hearing it right that it’s KFC Korea not, KFC Indonesia. Indonesia? Any other South East Asian Country should have been the one to sponsor such a bold move. Korea has never been known to prefer spicy food.

But with no intention to create confusion, it really is KFC Korea.

KFC is known for their breaded chicken and, they will always wear that medal around their neck for that. People will always be going to KFC for that juicy tender breading mix over chicken though some may prefer the hot and crispy version. Both go very well with their gravy on mashed potato. 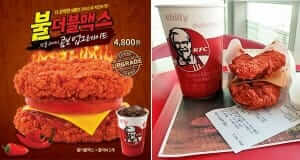 KFC Korea is already leading in their local chicken fast food industry but they don’t want to just sit on their laurels.

KFC Korea is already locally known as the best breaded chicken place. Now, they want to have an additional title. They want to own the title of owning the spiciest chicken craze.

Koreans have taken a huge step in establishing its identity as a major participant and a major influence in the world. Today’s Koreans are the world’s leading innovators. Their international successes and acclamations have produced a new generation of Koreans who are not only adventurous but aggressive.

It is only fitting that KFC Korea would venture in something that’s totally beyond the country’s traditional taste preferences. Korea has never been known as a spice country. That is a fact. But, it should not stop them from creating the spiciest food of all.

KFC is one of the most flexible international food chains. The existence of KFC Korea’s Fire Double Down Maxx is proof of that. Most international food chains do not allow their overseas franchise partners to deviate from the headquarters’ menu. Reason for that is for the maintenance of quality standards. Headquarters can only set and monitor quality standards for products that they are familiar with. But, in the case of KCF, they allowed their Korean partners to go ahead and experiment while carrying the KFC name and banner.

Is it because KFC trusts their Korean partners that much or, they are just that aggressive?

Koreans may have established themselves to be trustworthy business partners. It’s possible that KCF headquarters allowed KFC Korea to be inventive and aggressive but, will not grant the same flexibility to their other overseas partners.

It could also be that KFC’s breaded chicken main menu is so strong and so well established that a new product’s success or inappropriateness has so little effect on KFC image.

Well, it’s true that KFC will always only be judged on the quality of their breaded chicken and none other. Every other KFC overseas franchise can put anything on the local menu but, for as long as their breaded chicken is within KFC’s standards, they can’t do anything wrong enough to destroy KFC’s good name.

Whether it’s trust or aggressiveness, KFC has made a good business choice in giving selected overseas franchise holders an open hand in creating and introducing new ideas to their local markets.

For one, it is the cheapest research and development venture where all KFC headquarters has to do is wait and see.

Second, it is the safest way to test a product. What happens in KFC Korea stays in Korea. It has little or, no effect to KFC here in America. In case a new overseas KFC product plummets to the ground, it will just be another entry in KFC headquarters’ “Don’ts” list. It’s just going to be another news item on the daily news spread and Americans will still be eating their breaded chicken at KFC.

Everyone is keeping their fingers crossed for KFC Korea’s Fire Double Down Maxx. Let’s just hope that it tastes as good as it looks in print and every bite will be as interesting as the concept.

Who knows, Fire Double Down Maxx might have enough merit to make it here in the mainland to win our own spice wars.