You are here: Fast Food Prices > An Interesting History About Oberweis

Back in the day when social media was virtually unheard of and e-commerce was an alien concept, a guy thought that selling his surplus of milk produce would be a good idea. Peter J. Oberweis started selling his Illinois farm’s daily produce to neighbors in 1915 and the rest was history for this Kane County born business which has since expanded to include many dairy product subsidiaries all throughout the United States.

From the day they started delivering milk in 1927 with the help of a horse and a carriage, Oberweis has not really stopped their door to door service, particularly to homeowners on Chicago and St. Louis who still benefit from such a personalized service even up to this very day.

The Beginning of a Dairy Empire

While the family has been involved in selling milk to households since 1915, it was not until 1927 when they really focused on the business not just by delivering milk to homes, but also through a half partnership which the patriarch of the family purchased from Big Woods Dairy during the same year. It was not long after that when the family decided to buy the whole enterprise, giving birth to what is known today as Oberweis Dairy. Such move was not without challenge given the rough times the country had to go through during the Depression. Given the lack of technology back then to effectively refrigerate milk, preservation was difficult and consequently necessitated daily delivery to prevent spoilage.

The Extent of the Business

With a long history and tradition to back it up, Oberweis Dairy has proven to be effective in expanding its reach across America, with special focus on the Midwest. Nowadays their operations, mainly their home delivery service, cover states which include Illinois, Indiana, Missouri, Michigan, and Wisconsin.

In addition to this, the company has also established dairy and ice cream stores, all of which are corporate-owned but limited in scope with main focus on the Chicago area. In spite of this, franchising has allowed the said dairy product chain to extend its presence in neighboring states such as Indiana, Michigan, Missouri, and Wisconsin. The company also banks on a distribution service, giving their products easy access to regional supermarkets.

Milk Delivered Right at Your Door 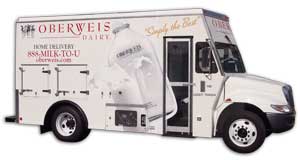 Oberweis Dairy prides itself in staying true to tradition and maintaining the good aspects of the company’s operations which have helped it remain to be one of the trusted brands in the market today. One notable service would be the door-to-door delivery which continues up to this day, giving everyone not just a taste of high quality fresh milk, but also of the personalized service which most people nowadays barely experience anymore.

In addition, milk is still delivered in glass bottles rather than plastic containers, and done so early in the morning just like in the good old days. Perhaps, the only noticeable change is that they no longer use a horse and a carriage to deliver the goods, which is more an issue of practicality and worse traffic conditions. 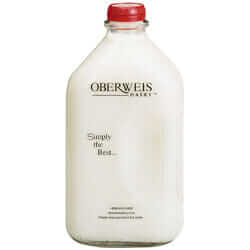 One aspect of milk production which gives Oberweis Dairy an edge over the competition would be their reluctance to use rBGH or recombinant Bovine Growth Hormone on their cows. To give you an idea, this growth hormone is usually used on cows to boost their production of milk. While such substance is not really harmful to human health as proven scientifically by the United States Food and Drug Administration, the company has decided to not jump on the bandwagon but instead stick to the natural method of milk production as nature deems fit. As such, one can rest assured that the milk he is drinking is all natural and without any unnecessary supplement that might lead to some unwanted side effect later on.

It’s only logical for a producer of milk to branch out to other dairy products and this is exactly what Oberweis Dairy has done through the years to expand the business. Aside from milk which serves as their primary product, the company has also been producing ice cream which could be purchased in most of their dairy and ice cream stores spread out in the Chicago area. Moreover, the Chicago Rabbinical Council has certified their ice cream as Kosher.

Other Products on Offer

Milk and ice cream are the more popular Oberweis products, but the company has also ventured into pastry items such as cakes, brownies, and cookies, which have been carried by some subsidiaries involved in the company’s lunch and sandwich program launched in 2004. Some of these products have been integrated to include ice cream pies and cakes, most of which have been certified to be gluten-free, as well as Kosher by the Chicago Rabbinical Council.