You are here: Fast Food Prices > History of Fazoli’s

Fazoli’s is a casual Italian-American diner that specializes in fast food such as spaghetti, pizza, ravioli, lasagna and other popular Italian-American food. Founded in 1988 by the Jerrico Inc., the company is now owned by Sun Capital Partners and is based in Lexington, Kentucky, U.S.

The concept for Fazoli’s restaurant was set in 1988, but it was only two years later when Fazoli’s Systems was established. During that time there were five locations in Lexington, Kentucky run by Jerrico Inc., which also owned Long John Silver’s seafood restaurants. Jerrico decided to concentrate on Long John Silver and sold Fazoli’s to Duskin Co. Ltd.

Duskin Co. Ltd and Kuni Toyoda, the franchise VP of Jerrico, formed Seed Restaurant Group Inc. and Fazoli’s Systems became one of the company’s subsidiaries. During this time Fazoli’s product line consisted mostly of pizza, but Toyoda realized that it would be difficult to go head to head with existing pizza chains. Instead he decided Fazoli’s should focus on pasta.  Aside from placing emphasis on pasta, Fazoli’s also upgraded the ingredients used in its recipes. This period also saw a shift in size as the pasta portions became larger and firmer.

The 1990s saw Americans become more health conscious and the changes in Fazoli’s put them in a prime position to take advantage of this opportunity. Aside from being healthy, Toyoda also noted that Italian food was very popular in the US. During the 1990s Fazoli’s began a marketing campaign advertising itself as a healthier alternative to burgers and fries. 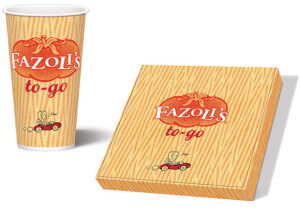 In addition, Fazoli’s began attracting more customers looking for a low cost alternative to expensive casual restaurants. In addition, Fazoli’s was earning a reputation for being spacious and warmly decorated, not to mention the good food. Aside from their Italian-American meals, customers could also avail of free drink refills and breadsticks. As their customer base continued to increase, Fazoli’s started opening more restaurants in small towns to get a foothold on the market.

Opening in small and medium sized towns had other benefits for the expanding company. For one thing the real estate was cheaper and the company was able to purchase old buildings instead of constructing one from the ground up.

Throughout the 1990s Fazoli’s expanded quickly and by 1992 had 35 restaurants. A year later another 25 locations were added. Not only did the number of locations increase, but so did the revenue for each restaurant. One of the reasons why the company continued to grow so quickly was the fact that incentives were given to locations that provided quality service.

One of the ways that Fazoli’s has been able to maintain its service is the company sends out a “mystery shopper” every month to these locations. This person actually checks the service provided by the location, and those with high scores get bonuses from the company.

Fazoli’s began moving into larger cities by the late 1990s, and by the turn of the 21st Century more franchises had opened. The year 2000 saw the company opening locations in Washington D.C., Las Vegas and other cities. In 2002, the company entered into an agreement with McDonald’s whereby McDonald’s would help it open 30 more locations around the US. In exchange, McDonald’s had the option to purchase Fazoli’s at a future date.

The growth of Fazoli’s continued and it was soon recognized by the F&B industry. In 1997, Restaurant Business published a database of the leading growth chains and Fazoli’s was ranked 7th overall. During this period the company also experienced an increase in revenue and became well known for their quality of service.

It was in December 1997 when Fazoli’s opened their 300th restaurant, and the following year Toyoda declared that the company was going public to raise funds to fuel another expansion drive. However, the planned public offering didn’t push through. Even so, the company announced that 150 new franchise deals had been signed.

In 2004, Fazoli’s changed its approach and launched the Smart Italian campaign. Smart Italian featured eight menu items with less than 8 grams of fat. In addition, the company set up a research development center to create new menu with more protein and vegetables. A year later in 2005 Fazoli’s announced that they were removing all trans-fat in their breadsticks.

As a testament to their commitment to removing unhealthy food from the menu, Fazoli’s launched a TV campaign promoting zero tans-fat and low-carb food items. On October 21, 2006, Fazoli’s was purchased by Sun Capital Partners Inc. for $100 million. In 2007, a year after being acquired by Sun Capital Partners, the company announced a revamp of its menu with emphasis on fat reduction. By 2009, over 30 new items were added to their menu and nearly 80% of the offerings changed. These changes brought positive results as customers took notice of the high quality ingredients.