When a pizza parlor calls itself a company, you know they mean serious business. Such is the case with Pie Five Pizza Co. What started out as a concept for a pizza company in 2011, Pie Five has grown from a Dallas-only parlor into a national phenomenon. They’ve won several awards such as being named among the “Top 10 Trendsetting Executives in Pizza” and earning a spot among the “10 Hot New Restaurant chains from Established Brands”.

With a repertoire of awards and accolades such as these, it begs the question of what makes it so different. A closer look at this pizza company will show that there is more to Pie Five that deserves more than a high five.

Considered as the pride of every establishment that deals with food, Pie Five’s menu serves as its crowning glory. And a unique crown it sure is. 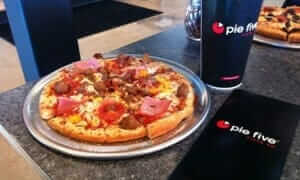 Any other customer would have thought against Pie Five being a pizza company with all the unique flavours that grace the menu. Every item is a bestseller and is well worth a try. Creative ingredient combinations such as Tuscan marinara and cheddar, cilantro and grilled chicken, tomatoes and olive oil, bacon and parmesan, basil and grilled chicken as well as bacon and Italian sausage all complete the unique set of flavours that sets pie five apart from any other pizza joint.

But just like the experts in the field, Pie Five also allows their customers to create their own flavour combinations. With more than 25 topping choices, over 5 sauce varieties and 4 original crusts, the possibilities will drive any pizza lover crazy.

Their crust entourage is nothing to be ashamed of either. Pie Five has taken the ubiquitous “thin crust” and have taken it to a whole new level of thin with their “artisan thin” variety that adds a little more distinction to their pies.

Another thing that sets Pie Five apart is their salad bar. No one has ever heard of a pizza parlor that also boasted of salads. But to even out the grease and to add in some of the healthy, Pie Five also hosts one of the most (if not the only) competitive line-up of salads that range from classic Italian, Spinach, Greek and Chicken Caesar. And just like their pizzas, their salads are also customizable as well, giving the customer full control over their cravings.

Just because it calls itself a company, that doesn’t mean things are priced differently. The people at Pie Five know about the pizza market and they intend to stay competitive and relevant through their prices. All of their pies are equally-priced, regardless of what toppings have been chosen and are pegged at $6.99. That’s a dollar less than the majority. They also have packages that are composed of a pizza, a drink and a choice between a salad or dessert that costs $9.99. Since they’re slightly more affordable that other pizza joints that average at the $9.99 mark for most of their regular pans, they keep a slight competitive edge over their competition.

The “Five” in Pie Five

What truly makes this pizza company stand out and earn its awards is found in its name. The “five” stands for a five minute preparation time. Yes, that’s right. The lovely people at Pie Five believe that people don’t have to wait for a good pie all the time. All it should take is five minutes. They make this possible through their incredible 2-minute baking ovens that they even allow the customers to watch while they prepare their pizzas. This transparency sets them on a league of their own.

But the oven isn’t the only thing you can watch. All the available toppings and cheeses and meats they put on their pizzas are also on display. You get to see the whole process of giving birth to a pizza right before it meets its delicious end in your stomach.

To add a little more TLC in their service, Pie Five guarantees all their patrons that none of their pies are baked “pre-made” waiting in a freezer somewhere. Every pie is made fresh starting from the dough all the way up to the toppings. With the slight exception of their gluten-free crusts, (which take a different set of ingredients to prepare) customers are ensured freshness with every pie.

And to top it all off, they have an amazing membership program creatively-called their “circle of crust”. Membership into this program earns you a card on which you can accumulate points for every order of salad and pizza you have with them. These points are redeemable for free pizza should you have enough points.

And to finalize everything, you get a free pizza pie on your birthday. If that isn’t nice, then pizza isn’t made with dough.

Indeed, Pie Five is revolutionizing the way we look at pizza parlors. This is a place where both new flavours and experiences come together to create one of the most refreshing approaches to pizza in the country.