To bring on more customers, fast food chains compete with each other in creating the most ingenious ads. Go to Carl’s Jr. and see those scantily clad women biting giant hamburgers, as this summer’s commercial for the Most American Thickburger that was a successful come on, just like the burger itself.

Despite its 1,250 calories, Americans love cheeseburgers so a hot dog wide a side dish of potato chips is a crowd drawer. Just look at a TV spot featuring a model clad in a flag-like red-white-and-blue bikini. She holds a huge piece of beef patty topped with hot dog dripping with melted cheese and beside her is a plate piled with potato chips. She is reclining on a bed placed on top of a pick-up truck adorned with American flag driven by a bull rider. The pick-up truck was set atop a warship sailing past the Statue of Liberty with fireworks exploding overhead.

As Americans grapple with their waistlines and become more calorie-conscious, some fast-food chains, such as McDonald’s, are including healthier menus as salads and chicken wraps. While Carl’s Jr. appeals to a different market targeting primarily young men with his American Thickburger combo of extra-large soda and fries. This treat contains enough calories needed daily by a sedentary young male, following the guidelines issued by the U.S. Department of Agriculture.

Industry experts, however, believe that the salads at McDonald’s and the huge burgers at Carl’s Jr. are primarily to generate buzz, enhance brand identity and attract customers who might still prefer to order standard burger and fries once they arrive at a restaurant.

The ‘Guilt Factor’ Behind McDonald’s

Professor Brian Wansink of Cornell University professor who studies the fast-food industry and consumer behavior said that McDonald’s chicken wraps and salads is intended to lure health-conscious parents to share more traditional fast-food fare with their kids or co-workers. McDonald’s is trying to alleviate the ‘guilt factor’ in parents of their desire to provide their children with substantial meals. 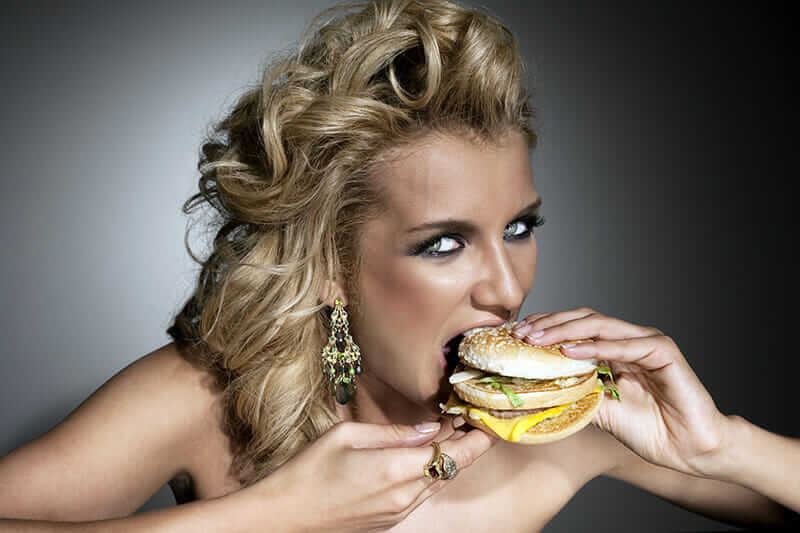 Brand Eating Editor Quang Hong who runs a fast-food news and reviews blog, said that Carl Jr.’s megaburgers for young hungry guys are enticing but they might end up ordering the standard menu. All ads of this fast-food chain is generally to create attention and a personal appeal for customers to buy their third- and half-pound burgers that cost $5 or $6, a premium price in the fast-food category.

The typical Carl’s Jr. Thickburger has about the same calories of five regular McDonald’s hamburgers each one loaded with 240 calories. Hong said that every Thickburger carries 900 calories.

A side from being a blog writer Hong is a lawyer by training in Los Angeles. He said that his food blog started in 2008 while attending law school and feels that it is an effective way to reach out to people to mind their calories as many take them for granted.

Earnings and Growth of Fast Food

According to a report from Yale Rudd Center for Food Policy & Obesity, total sales in the 50 largest chains in U.S. for a year amounted to more than $157 billion. So each household in the nation contributed an average of $1,335 for fast food budget. McDonald’s stays on top with nearly $36 billion in sales that was three times more than the sales of second-ranked Subway.

CEO of Arcature, a brand management consulting company based in Delray Beach, Larry Light, saw a continuous growth in the fast-food category with so many new ones sprouting to get a piece of that cake.

He added that there is no competition between Chipotle’s and McDonald’s as their patrons are distinct groups. Price-wise, McDonald’s still leads; as a burrito and drink at Chipotle costs $8 to $10 while McDonald’s Big Mac or Quarter Pounder with fries and a drink costs $4 or $5.

Although some patrons of Chipotle’s are willing to pay more for the humanely way they raised meat and locally sourced produce, but most customers prioritized their budget so they eat fast food regularly. Light said the plus factor in fast-foods was their different personal values.

Eating with Your Mind

Light said that he believes that people don’t just eat with their mouth but with their mind. For in the choice of a place to eat, food is not the only consideration but what it says about you as an individual. Cornell professor Wansink said that Chipotle fans probably wouldn’t patronize McDonald’s just because it has locally grown lettuce.

Professor Wansink said that fast-food chains are Balkanized with so much competitions going on. There is a Chick-fil-A and an In-N-Out Burger directly competing with Burger King and McDonald’s more than turning their attention to Chipotle. In such a market, restaurant chains have to send a message to their consumers about why they should eat there.

Fast food can be a boring industry so it needs extreme menu offerings to excite people and extraordinary ads to attract them!