Subway is a famous American fast food restaurant that retails submarine sandwiches, or “subs” as they are fondly called by the store’s patrons. They also serve salads and breakfast meals. They are considered as the fastest growing franchise and is run and owned by Doctor’s Associates, Inc. Subway was founded by Fred DeLuca who is also the founder for McDonald’s, and Dr. Peter Buck, who is an old family friend of Mr. DeLuca. 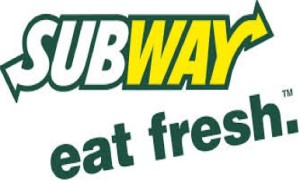 Every Subway logo is accompanied by the words “eat fresh”. These two are inseparable as “eat fresh” is Subway’s slogan, and its promise to its customers. In other words, whenever and wherever you enter a Subway restaurant, you are always guaranteed the freshest ingredients in every sandwich and salad you bite into. This is your very first guarantee that you are always eating healthy meals at Subway.

Subway prides itself in the fact that their existing customers keep coming back into their restaurants. They are proud of the fact that they were able to get across the commitment they expressed in their statement of core values, which is to provide customer satisfaction by offering high quality food. Subway achieved this by getting to know their customers. Through surveys conducted online and in their stores, Subway was able to determine that a certain number of customers had food allergies. They did not want to lose them and as a result Subway educated their customers by sharing the U.S Allergy and Sensitivity Information. This list shows all the ingredients that Subway uses on each of the food varieties on their menu, affording customers a way to avoid the products that might trigger allergies, while still enjoying and maintaining that Subway experience. Additionally, Subway introduced gluten-free bread and brownies to some locations in Texas for people who are allergic to gluten back in 2011. This is your second guarantee that the Subway brand aims to promote healthy meals at Subway.

For people monitoring their food intake either for medical reasons or simply for health reasons, this is a very big help. These facts allow them stay on track with the dietary requirements set by their doctors or dieticians. Subway’s nutrition list covers the nutritional facts on their core menu products which are: 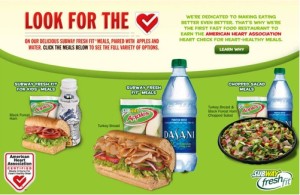 Another seal that lets you know that you are eating healthy meals at Subway is their oath to follow government food standards. One such regulation implemented by Subway in all their restaurants is the reduction of salt in all their sandwiches. Subway has also cut down on the salt content of their famous subs by fifteen percent. In the United Kingdom and Ireland, Subway reduced the salt content to as much as thirty-three percent. In addition to that, the Subway brand does not use monosodium glutamate in any of their standard menu items.

It is no surprise that most kids have a hard time appreciating meals that have vegetables in them. The Subway brand helps parents introduce healthy eating to kids with their Subway Fresh Fit Meals for Kids. A special meal complete with a Fit Mini Sub, apple slices, and low fat milk can be served to kids. Plus, the meal is packed in a special reusable bag that educates kids about the importance of recycling and being friendly to the environment. On the menu of the Subway Fresh Fit Meals for Kids are:

Subway has changed the way the world looks at a sandwich. The Subway brand has made it so that their famous subs are a healthy and complete meal. Here are the reasons why meals are healthy at Subway:

Eating in a fast food does not necessarily mean that it is bad for you. Not all fast foods are loaded with oil and salts after all. The next time you feel the need to eat; eat wholesome food items and choose healthy meals at Subway.