You are here: Fast Food Prices > Does a Pita Wrap Make You Fat? Truth Revealed Here

Fast food restaurants are trying to get into a healthy-conscious approach. And with establishments like Pita Pit and Subway, the options for us to grab a more nutritious meal just keep on getting more and more. They have salads, pitas, wraps and subs which are low fat, low calorie and still delicious. They spare us from the laborious prep time that we would just to get through one healthy meal.

But between Pita Pit and Subway, which fares better? Here is a simple comparison of the two biggest health food chains in the United States.

Pita Pit, established in 1995, and was riding in the trend of yuppie meals and health buffs. They had in mind to develop the ultimate alternative to salad and sandwiches and going for a Lebanese orientation became an instant success, and with 500 stores now open.

The bestsellers of Pita Pit are the chicken ceasar pita and the prime rib pita. Their pitas are loaded with lettuce, tomatoes, olives, tzatziki, cucumbers and feta cheese all combine to a flavorful mix. Aside from the classics, you can order a babaganoush pita, or the chicken souvlaki. Pita Pit also has breakfast pitas and a wide range of heathy fruit smoothies. Their pitas are generally a success, and people have said that they would want to return and order again 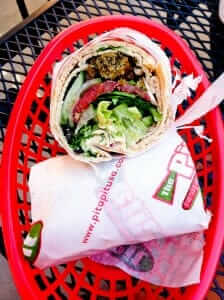 However, there have been complaints with the quality of their pita. Most of the reviews state that their pita is too thin, or tasted stale and old. Some complained that their pitas hardly has anything in them. Some complained that the restaurants were too crowded, obviously management was underestimating their dining areas. There were complaints over their delivery system. Delivery guys seem to lose their GPS and couldn’t find their way. The refunds would take 5 days to claim in case you decide to cancel your order.

Subway, on the other hand, has been in the health nut craze for a longer time. Established in 1965 in Connecticut by Fred DeLuca. He wanted to open a restaurant that served subs only, something easy and low cost to prepare and sell. The health-conscious subway only emerged till later. In 1999, Jared Fogle started the revolutionary Subway Diet, which only made the restaurant chain more popular. Now, Subway has 33,749 outlets worldwide.

Subway’s bestsellers include the Italian BMT, chicken teriyaki and the classic BLT. They also sell cookies and brownies. Jared Fogle said that he lost weight by just eating a foot long of veggie delight at supper. The chicken breast sub only contained more or less 200 calories and even with a diet soft drink and a small pack of potato chips, total calorie content will be at about 360. Not bad for a full and low calorie lunch. You can also order a side salad and a small pack of chips and pretzels.

However, food-wise, the quality of Subway has been on a decline. Many have complained that the price of the subs were getting too high for the quality of food that they were getting. Many complained that the bread was stale, and that the portions are less than what was specified in the menu, i.e. tuna was spread too thin, not enough beef etc. Their poor service perhaps is caused by underpaid and disgruntled employees. Subway is also getting bad publicity from the cold cuts that they serve, mostly because cold cuts are full of nitrates and are bad for one’s health.

For a chain that claims that you can “eat fresh,” the results are greatly disappointing. An older fast food chain should, of course, deliver better service and more delicious food. However, Subway is a fail in healthy eating, and even without the hippies clamoring for all-organic and natural food, the mere fact that they are scrimping on their subs is a no-no. There were people who complained about the freshness of their ingredients and how they are put in portions into the salad. For you to have a really healthy salad, you must skip out on all the other ingredients, and the price will be the same.

Choosing a healthy meal should not be incredibly expensive, nor an inconvenience. The mere fact that you are going to fast food is to get quick service, and if you are not getting the value of your money, then don’t bother at all. Pita Pit might have shortsighted their service but most reviews are good and the food is still well-received, and can outweigh the negative. Also, there were no complaints about their staff being underpaid or neglected. Another major plus about eating in Pita Pit is the option to take on different flavors like humuus or Lebanese style dressing that adds variety to your meal plan. Saves you a lot of time instead of going to the deli.

Sure, the Subway Diet might have changed a lot of people with weight problems. However, if eating an overpriced sub everyday would just damage your budget, better go to Pita Pit.