Those very spices used by the Colonel are top secret but do you know that there is a way you can make a copycat of the KFC fried chicken that you so love? Something as spectacular as the recipe for those wings are not going to stay secret for long so check out the DIY KFC chicken recipe below and make your own KFC friend chicken. As a bonus, you will also find a recipe for KFC fries simply because they make such an awesome combination.

The Colorful History of KFC

Fried chicken is fried chicken, isn’t it? However, if fried chicken uses a recipe so secret that they mix the spices in separate locations then you realize that KFC chicken is more than just fried chicken; it is a legacy! How did it came to be and what makes it so special? 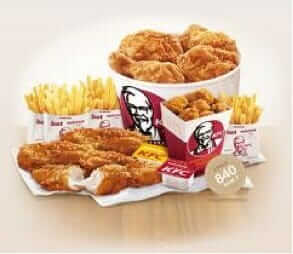 Back in the 1930’s Colonel Harlan Sanders got the good old folks licking their fingers clean and “Finger Lickin’ Good” has been the KFC slogan ever since.

Colonel Sanders was the man behind the original Kentucky Fried Chicken. When he was just 6 years of age he lost his father. This meant his mother had to work which also meant that he had to stay home to take care of his three siblings. His duties included a lot of cooking and by the time he was 7, he was a master of a vast range of regional dishes. You could say that coming up with a sensational recipe for chicken was bound to happen.

At the age of 40, Colonel Sanders purchased a service station, motel & café located at Corbin which was a town in Kentucky about 25 miles away from the border of Tennessee. It was there that the Colonel started experimenting with spices to flavor his chicken. After a few tries (it took him 9 long years!), he hit pay dirt and the same recipe is used until now. The secret recipe made use of 11 herbs and spices and as the fame of his chicken grew, he started selling his killer fried chicken on the highway.

The highway was closed though so he packed up and travelled the US by car while selling his chicken to restaurant owners and their employees. If the restaurant liked the chicken, he would be paid a nickel for every piece of fried chicken they managed to sell.

It gets so much more colorful than that however there are more pressing things to look into such as the steps for the DIY KFC chicken recipe and fries!

DIY KFC Chicken Recipe with Bonus Steps for the Fries

For this DIY chicken recipe you will need to perform the preliminary step of brining and it does take time but it makes for really yummy chicken a la KFC. Check out the ingredients for the DIY KFC chicken below. This recipe is enough for a young roasting chicken cut up into 10 pieces. You may also use 16 drumsticks.

For the brine you will need the following:

For the base mixture:

Now for the 11 secret herbs and spices because it is not KFC caliber unless it has these:

First thing you need to do for the DIY KFC chicken recipe is to rinse and blot the chicken. Mix 8 cups of cold water with Morton salt and the seasoning. Place in large container with a lid and place your chicken in it. This should be left alone for at least 4 hours in the icebox.

Measure the base mixture and the herbs and spices in a large container. You can use a Ziploc baggie for this. Makes sure you break up any lumps. Seal the container and shake vigorously so they mix well. Open the container and add your 2 cups of unbleached flour. Seal it again and then shake some more.

Remove your chicken from the brine and place one piece of chicken at a time inside the baggie. Seal and shake gently until it is coated thoroughly. Place coated chicken in a rack and let it stay while you do the rest of the chicken pieces. This will allow the chicken to absorb the spices and breading before the frying begins.

Place your deep fryer basket inside the deep fryer already filled with the recommended amount of oil. Preheat it to at 315F. If you do not have a deep fryer you can use a stove top pot just fill it with enough oil so that the chicken pieces are fully submerged and heat to 315F to 325F.

Place your chicken in the deep fryer or pot carefully because you do not want any oil to splatter. Make sure that you do not fry more than 3 pieces of chicken at a time. Cook for 15 to 18 minutes and then place on a wire rack to drain excess oil. You can place it inside a sealable plastic container for steaming so you get that authentic original recipe soft crust.

For the fries, choose hand-cut fries or potato wedges. In a bowl, mix the following:

Put your potatoes in the bowl and turn over a few times to coat evenly and place in the fryer. Let them cook for about 3 minutes and you have your copycat KFC fries.