You are here: Fast Food Prices > Burger Flipping Robots Are Here & They Only Cost $3 An Hour

Meet Flippy. He may look like a couple of kids standing on each other’s shoulders inside an oversized tube sock, but this robot can perfectly make burgers and cook fries around the clock and never calls in sick. He’s already installed – or early versions of Flippy – at Dodger Stadium and at some CaliBurger locations.

This whole $3 an hour has obvious implications for fast food workers, but what does it mean for consumers? 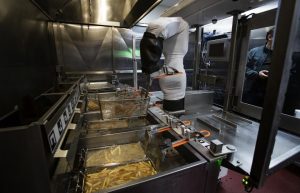 Well, for starters, Flippy was designed to slip in and work alongside humans (presumably for quite a while,) so most fast food joints will still need to employ humans. Additionally, Cali Group, CaliBurger’s parent company, is the parent company of Miso Robotics as well as two other restaurant industry start-ups. So it’s doubtful that they’re going to loan these guys to competing burger giants. But I would expect to see them in more fast food kitchens over the coming years. And – my final point – everyone freaked out when dishwashers came onto the scenes in the 1920’s, and now we know they’re amazing, so I wouldn’t get too worried just yet.

But what about your food?

It means the cost of your food will likely go down, if the price of your food doesn’t go down, we can at least hope for higher-quality ingredients. But your food can be made faster, and it’ll (with any luck) be more consistent and – hopefully – correct more often than not.

Since Flippy never gets distracted and has sensors that allow it to measure the temperature of the oil it’s frying in, it’ll take them out at the right time every time. So (in theory) no more burnt nuggets. It also has camera eyes that can feed pixels to a machine vision brain, so it’ll be able to tell when to flip the burger based on the color of the meat.

Have you seen these guys in action? We’re dying to hear what you thought, so hit us up in the comments!