You are here: Fast Food Prices > A Battle Between the Best Fast Food Restaurants

The fast food wars have been dominated by the best fast food restaurants you can think of as soon as you hear the phrase “fast food.” Fast food competitors always strive to have the fastest and most efficient services while remaining true to their words of supplying tasty and high quality meals.

McDonald’s has long been on the top of the fast food supremacy ladder. With their value meals and ever-changing menu offers, customers keep coming back for more. They successfully create a buzz for their products and pull off that sense of urgency they make whenever they have limited items. Add to that is their quick drive-through service which they strive to keep at no longer than 3 minutes for every transaction from start to finish.

Then there’s Wendy’s—one of today’s best fast food restaurants that has begun to give the leading name a run for their money. Competition has always been present, but today, Wendy’s has been making a great headstart compared to how McDonald’s is faring. What made this change possible?

Statistics on Wendy’s vs. McDonald’s

Last year, McDonald’s has seen a +0.12% growth while Wendy’s was at +0.68%. They are both historic names in the field of American Burgers, but the noticeable lead that Wendy’s made this year can certainly cause alarm on McDonald’s.

McDonald’s has a lot of tricks up their sleeves and they have been making use of those tricks to stay as one of the best fast food restaurants. However, is having a lot of tricks all it takes to succeed in the business? McDonald’s has been playing the game with many cunning tricks that have worked before, but they are now faced with a successful competitor in the form of Wendy’s who is steadily making its way up by being a carefully-planned one-trick pony.

In January 2014, McDonald’s sales are at around 20% compared to Wendy’s who is soaring at the high 65%. That’s a great difference when it comes to sales and considering how McDonald’s seems to already know every trick in the book, you’re probably wondering what went wrong.

McDonald’s has admitted several factors haven’t been going as planned for this year. One of the main things that didn’t work as planned is their menu. To be one of the best fast food restaurants, having a well-planned menu is one thing and successfully pulling it off is another. This is where McDonald’s failed. While they were able to come up with the menu which aimed to attract customers, they weren’t able to successfully sell their products.

McDonald’s had to drop their premium-priced Angus Third Pounder burger, and they also acknowledged how their line of salads is not selling as they hoped it would. Another factor which led to the decline in customer patronage was failing to achieve high customer satisfaction rates since their staff had a hard time when they introduced too many new items on the menu in such a short period of time. 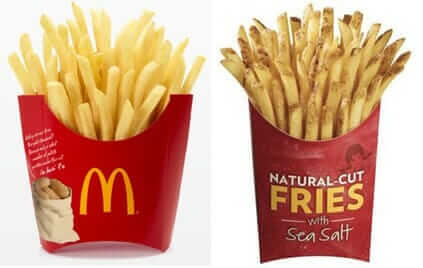 According to Don Thompson, chairman of McDonald’s, they need to reestablish the trust of their customers if they would like to overcome the flat profits and sales. Basically it means going back to the basic execution of restaurant level tactics and marketing at an even stronger level than before to help make sure that their menu stays relevant.

Plans to change how McDonald’s has been doing its business include adding more staff when they are extremely busy and changing the layout of their kitchen to allow their employees more comfort and space to move for food preparation purposes. However, one big question remains—will these measures help counter the new products that the other best fast food restaurants offer?

Part of keeping your customer’s satisfied if you’re a fast food business would be to have new flavors or offerings every once in a while. From there, decisions to turn it into a permanent menu item can be decided later on. McDonald’s has not released any new offerings which have successfully struck the money pot in the last few years while its competitor, Wendy’s, even has their pretzel burgers which are doing well in the market.

According to analysts, it was back in 2013 when McDonald’s was able to introduce a new food item which successfully hit the tastes of the people—McGriddles. Every other new menu items they have introduced hasn’t really stayed on for long in their menu—something which the other best fast food places are now able to achieve.

Another thing that analysts are considering is that the next big hit from these best fast food places might not even be food. What does this mean? Instead of food items which are new on the menu, the fast food place hoping to make a change and increase their profits may achieve this by capitalizing on other items such as beverages. These may be in the form of cold drinks or coffee with matching sides and desserts.

A Sense of Urgency

Because of the figures, the people in charge of McDonald’s ought to think of something, and they should achieve this soon. Wendy’s as well as the other best fast food restaurants are now able to make menu additions which successfully call the attention of their target market and to their favor, these “new” and “limited” menu items even make it to their list of regular favorites.

Marketing experts from the food industry believe that as the other food items on the menu experience growth, fast food places should adjust their menu to meet the needs and adapt to this growth. This involves proper training of their staff, right pricing, and strategic marketing to be able to pull things off.

Despite the fact that Wendy’s is steadily going higher and higher compared to McDonald’s, McDonald’s still has its own plans on getting back to the limelight. Whatever it is, they must do it soon considering how Wendy’s new ciabatta bun will be released soon—something that may yet again affect the standings of McDonald’s as the top fast food place when it comes to your favorite burgers.