You are here: Fast Food Prices > 7 of the Quirkiest KFC Menu Items

7 of the Quirkiest KFC Menu Items

KFC is one of the most recognizable names in fast food, no matter where you are in the world. And of course we’re all familiar with their original fried chicken and other signature offerings. Once in a while however, they tend to come up with new offers that make you do a double take.

Around the world, KFC has invented some pretty quirky offerings. Whether this is based on some consumer insight or just plain adventurousness, it’s clear that KFC is willing to play around with its menu and offer customers something they will talk about long after they’re done eating it. After examining the KFC menu and prices available around the world, these are the quirkiest of them all:

The Double Down is already a pretty quirky offering on its own, but mix this with the spicy Zinger and you’ll get something really out of this world. KFC Korea came up with this monstrous sandwich, which has a normal burger patty and breaded chicken as a substitute for burger buns. Aside from that, there’s bacon and cheese and dressing inside, as well that signature Zinger taste.

Come again? Now as if there wasn’t enough controversy surrounding the infamous Double Down, in the Philippines, the Double Down took an entirely new face altogether. In a plot twist that no one could have ever predicted, just imagine a hot dog wrapped with a fried chicken breast patty instead of a hot dog bun. The Double Down is about replacing the bread with deep fried and crispy chicken, and this isn’t an exception. Sure, the ketchup and mayo are still there, but this one looks nowhere near normal and is as quirky as quirky can get.

I bet no matter how many times you look at Japan’s KFC menu and prices, never in your wildest dreams did you think they would one day offer you… wait for it… deep fried SOUP. Yes, soup. You’ll find creamy soup corn potage in Japanese cafes everywhere, so it’s nothing the Japanese aren’t used to. But what KFC did is that they breaded the corn potage and deep-fried it to make a crunchy snack. So no, it’s not exactly the kind of soup that you scoop with a spoon. You can bite into it like any other crunchy snack available in KFC. Once you do however, it’s almost a guarantee that you’ll never look at corn soup the same way again.

A burrito? In KFC? Are you sure you’re in the right fast food restaurants? It seems that if you ever find yourself in KFC New Zealand, then yes, you’re exactly where you belong and everything is still right with the world. It is exactly what it sounds like, and you basically get fried chicken strips, bacon, cheese, and BBQ bourbon sauce all wrapped in a flour tortilla. This is then deep fried to a crisp and made available for anyone and everyone who wants a taste of KFC’s newest creation. No, it’s not a chimichanga.

Now, KFC has its fair share of chicken sandwiches, from your Zingers to your Double Downs, and it seemed like there was no more room to get any more inventive. KFC Brazil didn’t think so, and they raised some eyebrows when they introduced the Corn and Philly Chicken Sandwich together with Philadelphia Cream Cheese. Imagine creamed corn that’s made with Philadelphia Cream Cheese and put on top of a crispy thigh fillet. Add the sesame bun, and you’ll get a sandwich that sounds unusual but is actually really yummy. Now why didn’t we think of that first?

KFC China has come up with a burger that from the outside looks like any other normal KFC chicken burger. There’s a sesame bun, some, dressing, lettuce, cheese, and of course, the chicken fillet that’s breaded and deep fried to perfection. This all sounds perfectly normal and there’s absolutely nothing fishy about it, until you decide to bite into the burger and realize that the patty is not actually chicken but whole pieces of shrimp. 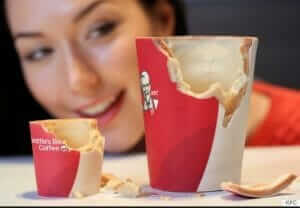 Now if you think you’ve seen it all, think again. You haven’t seen quirky yet, because what could be weirder than drinking your coffee and then eating, yes EATING, the coffee cup afterwards? In KFC of all places! KFC UK has teamed up with Seattle’s Best to offer coffee in edible coffee cups. Called “Scoff-ee Cups,” you can bite into them because they’re made of cookies, sugar paper, and heat-resistant white chocolate. Not only that, but they can smell like coconut sun cream, wildflowers, and freshly cut grass. Really.