You are here: Fast Food Prices > 15 Weirdest and Most Extreme Fast Food Items from Across the World

Fast food chains strive to get noticed and when doing so, they tend to have weird entries to catch their market’s attention. Sometimes, their weird creations make a positive impact on the target market they have, but sometimes they don’t – and only last for a limited period because of floppy sales.

Here are some of the weirdest and most extreme fast food items which you may or may not want to try because of their overall odd appeal. Next time you visit these places from all over the world, check them out and have a unique fast food dining experience with these weird yet noteworthy fast food items: 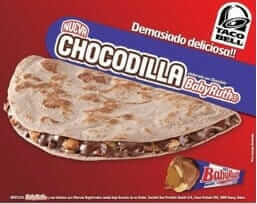 Taco Bell is a well-known name when it comes to freshly-made tacos. However, they also have their share of most extreme fast food items. Quesadillas from Taco Bell usually have meat and cheese fillings but Taco Bell in Guatemala decided to put a sweet twist on theirs. They have their very own Baby Ruth Chocodilla-a calorie-filled chocolatey quesadilla for those with sweet cravings.

In South Korea, Pizza Hut released one of their weird menu items in the form of the Coconut Shrimp Pizza, which is basically what it says it is—pizza topped with shredded coconut meat, and shrimp. The shrimp may be alright as a seafood topping, but the coconut and shrimp combination is what heightens its weirdness.

From Dunkin’ Donuts Singapore, they have their entry for the most extreme fast food items in the form of Wasabi Cheese Donuts. Basically, you’ll have your classic donut but with a bit of a hot modification. Instead of chocolate or something sweet latticed on top of it, you’ll have wasabi! Another weird thing they have—but more on the milder side, is their Seaweed Cheese Donut.

Another entry from Taco Bell, they offer the Waffle Taco which is one of their breakfast items. It is a waffle shaped into a taco and it envelopes your sausage patty and eggs. Think of it as a to-go and convenient way of enjoying your morning waffles.

South Korea isn’t the only place serving weird pizza from Pizza Hut. The Winter Double King Pizza from Japan is one of the most extreme fast food items. Think of having crab, shrimps, broccoli, beef, corn, potatoes, mayonnaise, and more on your pizza. If that isn’t a weird flavorful overload, we don’t know what is!

Don’t let the name scare you off. This menu item from Pizza Hut Malaysia has garlic Napoli sauce and cheese, inside the outer crust portion which can surely send a surprise as you bite into the crunchy exterior crust.

McDonald’s is loved for some very convenient meals to go. One of those is their apple pie pockets. In the Philippines, Jollibee made their own version, but with a more unique filling—tuna. The Tuna Pie from Jollibee is a distant relative of the fast food chain’s Peach Mango Pie, and kind of a remake of the apple pie from McDonald’s. 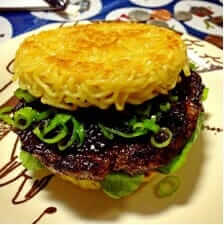 Keizo Shimamoto invented the ramen burger just recently, and it has taken New Yorkers by storm. Although not exactly a “fast food” item, it is a well-known culinary oddity at the Smorgasburg in Brooklyn, New York. Ramen noodle “buns” sandwich a juicy patty, special sauce, and some garnishing make this Japanese cuisine-inspired burger a try.

Burgers usually come with fries as their side item, but with the French Fry Burger from Burger King, you would no longer need that! If you enjoy the burger and fries tandem and would like it in a convenient package, this is the way to go.

The coffee shop loved all over the world because of its great beverages and for the status lifting feeling having a Starbucks drink in hand gives, Starbucks continues to try and find ways to make people who don’t love coffee love them. Starbucks Refreshers is a drink made from the extract of green coffee. Unlike the usual coffee and milk-colored drinks they served, this is an iced-tea like drink which actually tastes very far from your usual cup of coffee. 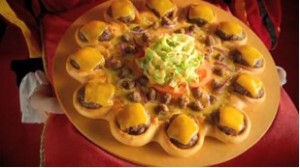 Milkshake is good. Bacon is great. Put them together and you’ll have a bacon milkshake. Jack in the Box came up with this not so dessert-flavored milkshake which made it to this list of most extreme fast food items because of the highly-contrasting ingredients that this curious milkshake has.

One of the top names when it comes to burgers is McDonald’s and when it comes to the most extreme fast food items, they have a talent for making them. An example of this is the MegaMac which is only available in Ireland and Australia. It has four patties, the standard pair of burger buns, and one additional middle slice. Match that with fries and drinks and you’ll surely have a mega meal.

This list of most extreme fast food items won’t be complete without the Ebi Fillet-O from McDonald’s Japan. Another proof of their non-stop love for seafood, this burger has breaded shrimp patties! 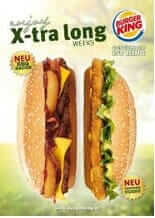 A burger alone has quite a lot of calories. The X-tra Long burger from Burger King in Austria and the Netherlands is sure to have even more! These are basically sub-sized burgers which can surely give you—or someone you choose to share it with, a complete and satisfying burger experience.

These weird and extreme fast food items can make a mark on your culinary weirdo meters, so try them out when you can.