When you are looking for a new gastronomical adventure, trying out strange food items can really set you up for an unforgettable experience. These strange items can be inspired by special promotions, the result of the quirky minds of the marketing people in the fast food industry, or basically just items intended to make a lot of noise and get the fast food place noticed. If you ever travel or get around to the places which serve these oddities or simply want to have an idea about them, here are some of the strangest fast food items you should not miss: 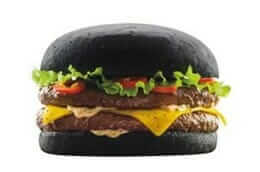 Quick is a Belgian fast food chain which once capitalized on the 3D release of Star Wars: The Phantom Menace back in January. This burger will definitely catch your attention since it has completely black buns—staying true to the “Dark Side” of the burger force as they say. The burgers are not burned in any way, and are actually just dyed to look as black as the night sky. It has two beef patties, and tomatoes, lettuce, and cheese. Other than the color, it’s pretty much a normal burger.

The Bacon Sundae from Burger King

Focusing on the contrasting appeal of sweet and salty food items, Burger King made their own Bacon Sundae. That’s right, it’s basically a vanilla sundae with the chocolate sauce or fudge but with a distinctive topping—bacon. This was a limited dessert back in June of 2012 and was one of the entrees in their summer menu. Although appealing as a food for splurging, it has a calorie count of over 500—it has 18 grams of fat and about 61 grams of sugar.

Not only does Domino’s serve pizza, but they also earned their spot in this list of strangest fast food items because of their bread bowl pasta. While there is definitely nothing wrong with bread and pasta together, the penne pastas inside their bread bowls just look a little disconcerting when you’ve grown used to the usual pasta presentation. It cost only $5.99 ad even had its own “build your own” variant. 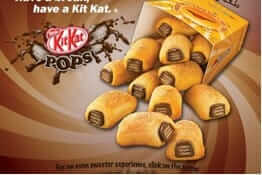 Pizza Hut is known to have a wide variety of snacks, sides, and appetizers. One of the weirder ones that made it to the strangest fast food items is their Kit Kat Pops. This was made available in Pizza Hut stores in the Middle East and Kit Kat pops had the chocolate wrapped in pizza dough. Strange as it may sound, the dough-wrapped wafer chocolate actually has an intriguing look which makes consumers want to try it.

Bacon and Eggs on a Donut from Dunkin’ Donuts

This item makes it to the list of strangest fast food items because of its overall look and construction. Again working on the sweet and salty appeal of food, imagine eating bacon and an egg sandwiched in glazed donut. This is more formally known from Dunkin’ Donuts as the Glazed Donut Breakfast Sandwich which has 360 calories—a little less than their 390-calorie turkey sandwich, but still quite hefty for a sandwich calorie count. 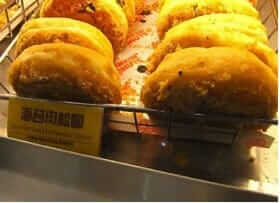 Another entry from Dunkin’ Donuts, China has made its own version of more attractive offerings to their local consumers. Whenever people hear the word “donut,” what initially comes to mind is some kind of sweet dessert. The Pork and Seaweed Donut from China’s Dunkin’ Donuts stores is far from that image. It is a savory donut which is stuffed with seaweed and shredded pork. Dunkin’ Donuts has had an expansion campaign, hence the efforts for unique products in the area. This savory pork donut is only available in Asia though.

Double Down from KFC

Chicken lovers just love KFC and their original recipe chicken goodness. Now imagine that in a fillet fashion, with bacon, mayonnaise, and cheese. Instead of two burger buns, the fried chicken fillets are the ones sandwiching the bacon and cheese filling. It’s a big-sized serving which can surely keep an adult full, and is basically something you can eat with either some rice or mashed potatoes and gravy! Although sold as just that item, it makes a great deal for those who enjoy munching on both juicy chicken and yummy bacon at the same time.

Pizza Hut sure knows how to come up with the strangest fast food items because their Double Sensation Pizza is another one to get much attention. It’s actually two pizzas in one! A great deal if you want to try out two flavors, but when you consider how it looks, it’s far from your usual kind of pan pizza. It has ham, turkey, mushroom, and bell pepper toppings on the outer pie with a cheese stuffed crust, while the inner pie has Alfredo sauce, smoked, chicken, pepper and some zucchini.

Burger King is known to have its own weird moments, and one of their more memorable quirks is the Pizza Size Burger which was released in Burger King Japan. The main difference is that it is served in pizza fashion, but is still just a burger with four patties instead of a big one, and buns which had bigger circumferences. It has an 8.8-inch diameter, and can be cut up and enjoyed like pizza sandwiches—or pizza burgers! 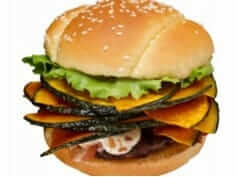 Another less ordinary menu item from Burger King Japan, they have the pumpkin burger which featured pumpkin-flavored burgers which they released in the fall. They use what is called as the “Japanese pumpkin” and combined it with other ingredients such as creamy sesame seeds, almonds, cashews, and hazelnut in the special sauce. You can even order the “pumpkin bomb” option which has 10 pumpkin slices instead of just two.

Surely, these strange menu items have piqued your curiosity when it comes to weird fast food creations. Although some of them are no longer being produced, you can still try out the other ones which are still enjoyed in different places all over the world!